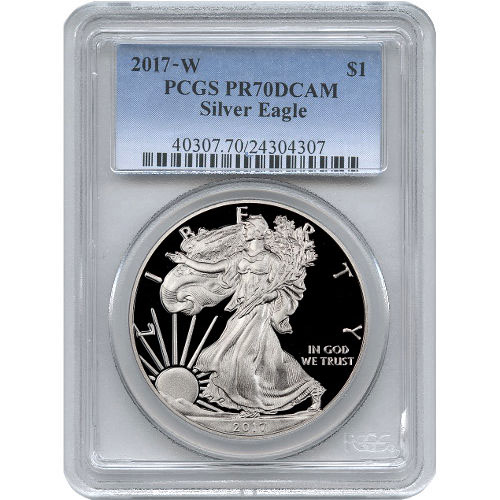 The Silver American Eagle is the most important annual release from the United States Mint, generating millions of units sold across the bullion, proof, and uncirculated versions. After a successful celebration of the coin’s 30th anniversary in 2016, the US Mint now releases the 2017 issue of the popular silver coins. Right now, the 2017-W 1 oz Proof Silver American Eagle coin is available to purchase online at Silver.com with a perfect certification.

The 2017 Proof Silver American Eagles available to you today are in perfect condition in the eyes of the PCGS. Coins with a PR70 grade exhibit full, original mint luster, and lack all types of detracting flaws on the coin’s surface areas.

A Deep-cameo, or DCAM, designation is reserved for proof coins with an especially beautiful finish. Coins in this condition exhibit strong, frosted matte finishes on the design features and a deeply-mirrored, clear background field.

On the obverse of each 2017 Proof Silver American Eagle certified coin is the image of Walking Liberty, which was originally created in 1916 by Adolph A. Weinman. Liberty is depicted walking toward the setting sun as a symbol of the nation’s drive toward a brighter future.

If you have any questions, please don’t hesitate to ask. Silver.com customer service associates are available at 888-989-7223, online using our live chat, and via our email address. Don’t forget you can also find the latest spot price of silver on our homepage!