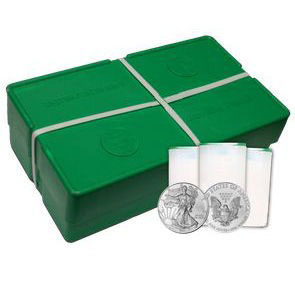 Silver American Eagle coins are arguably the hottest selling products in the precious metals industry. Sales figures for the official silver bullion coin of the United States have reached astronomical proportions since the onset of the Great Recession, jumping from 10.4 million in 2007 to 40.02 million by 2011. Right now, 2017 Silver American Eagle Monster Box sets are available to purchase online at Silver.com.

Each of the individual 2017 Silver American Eagle coins in this Monster Box collection are in BU condition. Coins in BU condition exhibit no signs of wear and tear, though you may notice minor flaws ranging from breaks in the luster and spotted surfaces to contact marks from the coining process.

In this Silver.com listing, you can purchase a bulk collection of 2017-issue Silver Eagles courtesy of the 2017 Silver American Eagle Monster Box from the United States Mint. Included inside of your US Mint-sealed Monster Box are 500 of the 2017 Silver American Eagle coins, contained in groups of 20 within sealed plastic tubes totaling 25 tubes in all. The total weight is 500 Troy oz of .999 fine silver with a face value in total of $500 (USD).

The obverse of all 2017 Silver American Eagle Coins includes the image of Walking Liberty, first used on the Walking Liberty Half Dollar from 1916 to 1947. Created in 1916 by Adolph A. Weinman, this image is widely regarded as one of the finest in the history of American coinage.

On the reverse of all 2017 Silver American Eagle coins you’ll find John Mercanti’s heraldic eagle of the United States. An image used on various American coins dating back to 1794, this depiction is the latest modernization of the heraldic eagle, completed in 1986 by then-US Mint Chief Engraver John Mercanti for use on the Silver Eagle.

If you have any questions, please feel free to ask. Silver.com customer service team members are available on the phone at 888-989-7223, online using our live web chat, and via our email address.