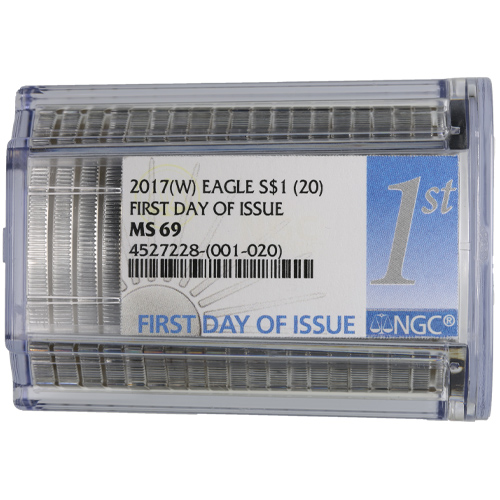 The Silver American Eagle coin is one of the world’s most popular, with annual sales in recent years that eclipse 30 million units with relative ease. Although 2016 saw sales fall from back-to-back record-breaking years, with just over 37 million coins sold it was certainly far from a poor performance. Today, the 2017 Silver American Eagle NGC Gem Roll is available to you online at Silver.com with near-perfect grades!

The Silver American Eagle is the official silver bullion coin of the United States. Introduced in 1986, the coins are now available from the US Mint each year in bullion, proof, and burnished versions with only a 1 oz weight available in all three versions.

The image featured on the obverse face of the coin comes from Adolph A. Weinman. He created the image of Lady Liberty striding toward the setting sun with the American flag draped around her shoulders in 1916 for use on the nation’s half-dollar silver coin. It remained on that coin for more than 30 years, and was not replaced until 1947.

All of the 2017 Silver American Eagles in this NGC Gem Roll are in Mint State 69 condition. Certified coins of this grade have full, original mint luster, but also feature a maximum of two minor detracting flaws such as minuscule contact marks or hairlines found only outside of the primary focal area.

More importantly, all 2017 Silver Eagles included inside this 20-coin NGC Gem Roll are First Day of Issue coins. The NGC guarantees these coins arrived at their depository within one day of the 2017 release date set by the US Mint for Silver American Eagle coins.

Today, the image features on the obverse face of all 2017 Silver American Eagle coins. In it, Liberty walks toward the setting sun with the American flag draped around her shoulders. The reverse of the 2017 Silver American Eagle features US Mint Chief Engraver John Mercanti’s heraldic eagle. Echoing the images of the Great Seal of the United States, the image features 13 stars representing the original colonies, and a bald eagle behind the heraldic shield of America.

Please don’t hesitate to contact Silver.com at 888-989-7223 if you have any questions. You can also email us, visit our website to chat with us live online, or browse our website catalog and view the current price of silver.