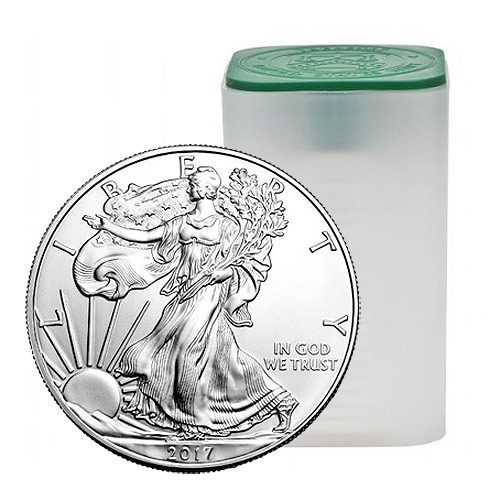 It’s hard to argue with the popularity of the Silver American Eagle coin. While some numismatists were disappointed to see the coin not reach another milestone in 2016, which would have been a third-consecutive record-breaking year, 39 million coins sold is nothing to shrug off. Today, the all-new 2017 Silver American Eagle Coins are available in tubes of 20 online at Silver.com.

All 2017 Silver American Eagle coins in this listing are in BU condition. Coins in BU condition show no signs of wear and tear on the surfaces, though you are likely to notice a range of minor flaws that include breaks in the luster, spotted surfaces, and contact marks as a result of the production process at the mint.

No coin can soar to new heights every year, so it was inevitable the Silver American Eagle would fail to set a new sales record at some point. After breaking sales records in 2014 (44 million) and 2015 (47 million), the 30th anniversary release of the coins in 2016 was met with huge demand for the proof coins but total sales of 39 million.

On the obverse of the 2017 Silver American Eagle is Walking Liberty by Adolph A. Weinman. Created in 1916, the Walking Liberty design first featured on the nation’s 50-cent piece from 1916 to 1947, and was revived in 1986 for the Silver Eagle. More recently, it featured on a special 24-karat gold release in 2016 from the US Mint, the 2016 Centennial Walking Liberty Gold Coin.

The reverse of all 2017 Silver American Eagle coins bears the heraldic eagle of the United States. Refined in 1986 for the Silver Eagle by US Mint Chief Engraver John Mercanti, it depicts the bald eagle behind the nation’s heraldic shield clutching arrows in one talon and an olive branch in the other.

Please direct your questions to a Silver.com associate. Our team members are available at 888-989-7223, online using our live chat, and at our email address.