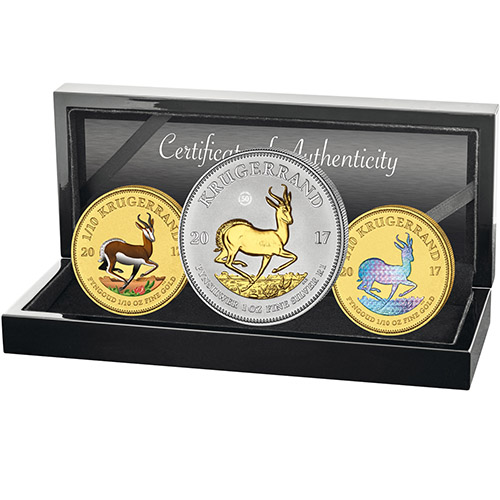 The South African Mint marks the 50th anniversary of its Gold Krugerrand coin by offering countless new products bearing the popular Krugerrand design. This set features a total of three options not available in the average release year.

All three coins in this 2017 50th Anniversary South African Krugerrand Set are presented inside of a black beauty case that includes individual holders for each of the three coins.

On the obverse of all 2017 Krugerrands in this 50th anniversary set you’ll find the image of Paul Kruger. Born Stephanus Johannes Paulus Kruger, he was the leader of the Republic of South Africa during the Boer Wars and would go on to serve as its third president.

The reverse of all Gold and Silver Krugerrand coins features the image of a Springbok antelope. The design fields of the modern Krugerrand coins was refined by Otto Schultz for the South African Mint in 1984.

Please contact Silver.com if you have any questions. You can reach our customer service team at 888-989-7223, chat with us live online, or simply send us an email with your inquiries.