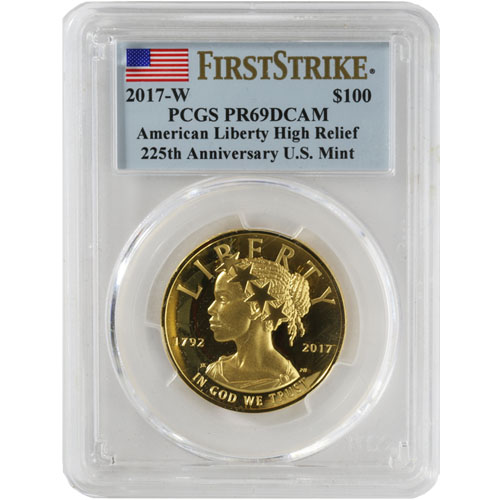 To celebrate the 225th anniversary of the founding of the United States Mint, the West Point Mint issued a brilliant 24-karat gold coin in 2017 with a revolutionary image of Liberty. Throughout American history, Liberty’s effigy of national currency has reflected Greco-Roman and European-centric design facets. In this distinctive release, Liberty showcases the diversity of the nation with an African-American female as Liberty. Today, 2017-W 1 oz Proof 225th Anniversary Gold American Liberty Coins in near-perfect condition are available to you online at Silver.com.

The Coinage Act of 1792 was passed by Congress with multiple goals in mind. In addition to setting the early denominations of US currency to be produced, it also established the United States Mint system to be based in Philadelphia. 2017 marked 225 years since the founding of the mint and the issuance of these 24-karat gold coins was part of that broad celebration.

All of the 2017-W 1 oz Proof 225th Anniversary Gold American Liberty Coins are available to purchase today in near-perfect condition. Coins with a PR69 certification have full, original mint luster with no more than two minor detracting flaws present. Acceptable flaws at this grade level include minuscule contact marks or hairlines located outside of the primary focal points of the coin.

The included DCAM label identifies these specimens as deep-cameo proof coins. A deep-cameo proof has strong, frosted designs that contrast beautifully with the deeply-mirrored, clear background fields of the coin.

Lady Liberty is showcased on the obverse of the 2017-W 1 oz Proof 225th Anniversary Gold American Liberty Coin. In a historic first, this depiction of Liberty captures the characteristics of an African-American female. She is shown in the traditional Liberty robe with a unique crown made of stars on her head.

An American bald eagle is featured on the reverse side of 2017-W 1 oz Proof 225th Anniversary Gold American Liberty Coins. In this unique design, the eagle is shown flying through the design field from left to right. The bird is in midflight and flaps its wings to propel itself forward.

Please don’t hesitate to ask questions of Silver.com customer service if you have any questions. You can call us at 888-989-7223, chat with us live online, or email directly.