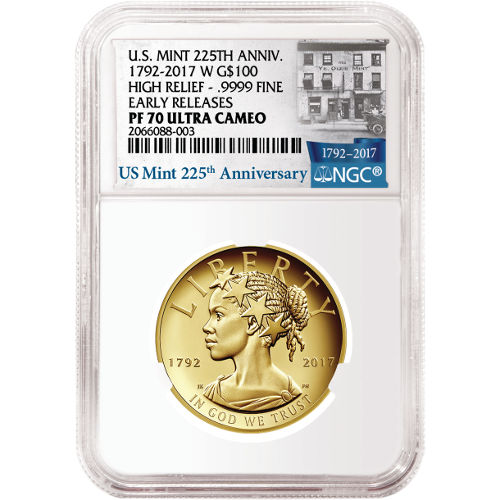 2017 marks the 225th anniversary of the founding of the United States Mint, and the mint is celebrating with a brand-new 24-karat gold coin featuring Liberty as she has not been portrayed to date on an American coin. Like many other American coins, Liberty and the bald eagle represent the nation on this gold coin, but at the same time this is an all-new concept for American coinage. Right now, the 2017-W 1 oz Proof Gold American 225th Anniversary Liberty Coin is available to purchase online at Silver.com in perfect condition!

Each of the 2017-W 1 oz High Relief American Gold Liberty Coins in this product listing is a perfect specimen in the eyes of the NGC. Coins with a PF70 exhibit full, original mint luster and lack any form of detracting flaw on the surfaces of the coin.

Created by Mint Artistic Infusion Program Designer Justin Kunz and sculpted by Mint Sculptor-Engraver Phebe Hemphill, this new depiction of Liberty features in a left-profile relief portrait as a woman with African-American features rather than a white woman.

2017 American Liberty Gold Coins are struck in high relief and use edge lettering for just the second time in US Mint history. The first use of edge lettering was on the 2016 American Silver Eagle Proof coin to celebrate its 30th anniversary, and now the US Mint uses it again to engrave “225th Anniversary” on the coin’s edge, with one star on either side of the edge lettering.

On the obverse is that left-profile portrait of Liberty with African-American features. Instead of the traditional use of a wreath of laurels for her crown, this Liberty wears the crown of stars found on the Statue of Freedom atop the dome of the U.S. Capitol building in Washington DC.

If you have questions, don’t hesitate to ask. Silver.com customer service is available at 888-989-7223, online using our live chat, and via our email address.