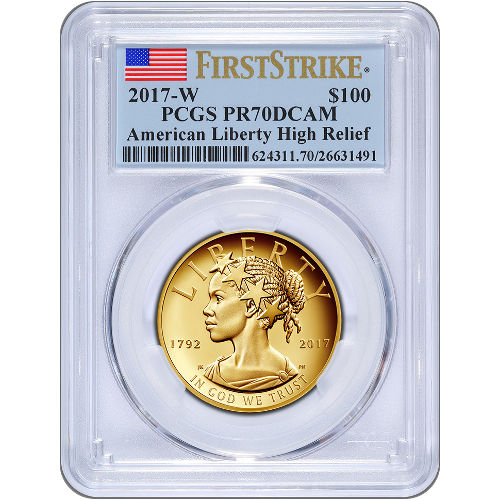 In 2017, the United States Mint celebrates its 225th anniversary. What started from one location in the original Philadelphia Mint has expanded and contracted over the past two-and-a-quarter centuries into one of the finest sovereign minting operations in the world today. Today, the 2017-W 1 oz High Relief Gold American 225th Anniversary Liberty Coin is available to you online at Silver.com with a perfect certification.

The 2017 American Liberty Gold Coin is the first in a series of .9999 pure 24-karat gold coins that will be released by the United States Mint in the years to come. Each one will feature a new depiction of Liberty.

On the obverse is the left-profile portrait of Liberty with African-American features. Instead of the traditional use of a wreath of laurels for her crown, this Liberty wears the crown of stars found on the Statue of Freedom atop the dome of the U.S. Capitol building in Washington DC. This design was created by Mint Artistic Infusion Program Designer Justin Kunz and sculpted by Mint Sculptor-Engraver Phebe Hemphill.

Please don’t hesitate to reach out to Silver.com with questions. Our customer service team is available at 888-989-7223, on the web using our live chat, and via our email address. To find the price of gold today, head over to our homepage!