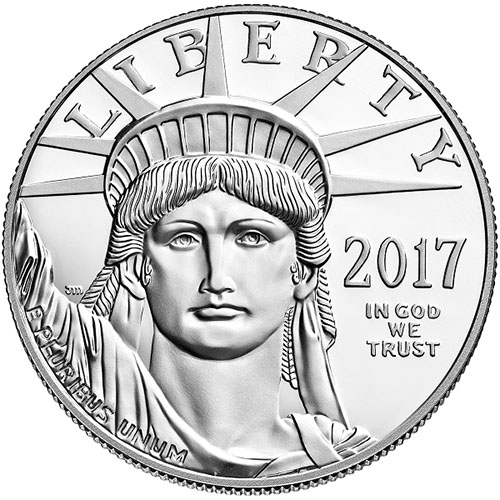 The Platinum American Eagle coin series from the United States Mint is one of the more unique offerings from the mint. When it was introduced on June 6, 1997, the Platinum Eagle became the first-ever bullion coin from the mint with new designs to be offered on the reverse face each year, a feature of the proof series only. Further, the coins became the highest denomination US legal tender coins when issued a $100 (USD) face value. Today, the 2017-W 1 oz Proof Platinum American Eagle Coin is available to you online at Silver.com.

Over the years, the Proof Platinum Eagle series has featured various changes in the design. Not only have the exact design elements changed each year, the design themes have changed. For example, the bald eagle featured on the reverse of Proof Platinum American Eagle coins from 1997 to 2003, with various other themes unveiled in the years following.

All 2017-W 1 oz Proof Platinum American Eagle Coins in this listing are available inside of a blue, lacquered presentation case from the United States Mint. The coins are individually enclosed in capsules inside the box, and numbered Certificates of Authenticity are included with your purchase.

The obverse of the Proof Platinum American Eagle coin includes the original design from John Mercanti that has appeared on the bullion and proof obverse since 1997. This design offers a visual of the Statue of Liberty’s face as she looks out for the refugees of the world to welcome them to America.

On the reverse of the 2017-W 1 oz Proof Platinum American Eagle Coin is the original design from Thomas D. Rogers. Designed in 1997 and used only in that year on the proof coinage, you’ll find the image of an American bald eagle as it flies over America with the sun rising behind it.

Please don’t hesitate to contact Silver.com with questions. You can call us at 888-989-7223, chat with us live online, or simply send us an email. Don’t forget to check platinum prices on our homepage when buying!