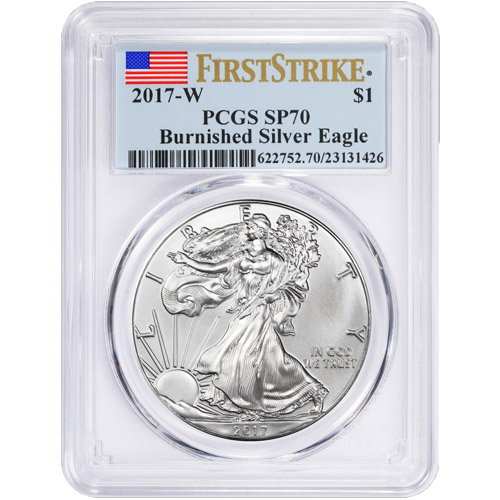 Burnished Silver American Eagle coins were introduced by the United States Mint in 2006 as part of the 20th Anniversary celebration of the American Eagle Series. Both the gold and silver versions of the coin received a burnished coin, but they have experienced varied demand over the years.

In 2009 and 2010, the burnished eagles were halted in production as the US Mint first coped with intense demand for the silver bullion eagles and then phased back in the proof Silver Eagles. Burnished Eagles have been available since 2011, but often with much lower mintage figures than before the 2009-2010 halt.

All 2017-W 1 oz Burnished Silver American Eagle coins in this listing have SP70 grades from the PCGS. Specimen Proof 70 coins are in perfect condition, with full, original mint luster and no detracting flaws of any kind.

The obverse of the Silver American Eagle features the Walking Liberty design from Adolph A. Weinman. Created in 1916, it depicts Liberty walking toward the setting sun as a symbol of America’s constant drive toward a brighter future.

On the reverse of all 2017-W 1 oz Burnished Silver American Eagle coins you’ll find the heraldic eagle of the United States. It depicts the bald eagle behind the nation’s heraldic shield, with arrows in one talon, an olive branch in the other, and 13 stars above his head representing the original American colonies.

All Burnished Silver Eagles are produced by the West Point Mint, as reflected by the presence of the “W” mint mark in the lower-left field on the reverse side of the coin.

Please don’t hesitate to reach out to Silver.com with questions. Our associates are available at 888-989-7223, via our live chat, and by sending us an email.