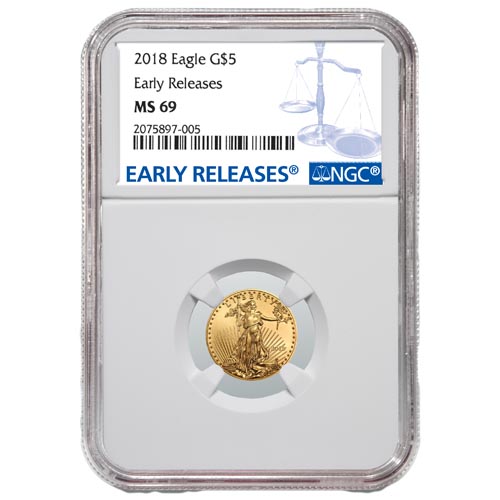 Gold American Eagle coins are the most popular gold coins from the United States Mint. The official gold coin of the United States, the Gold Eagle has been offered every year since 1986. The coins are available in four weights with versions that include bullion, proof, and burnished. Right now, 2018 1/10 oz Gold American Eagle Coins are available to purchase online at Silver.com with NGC certification.

Each 2018 1/10 oz Gold American Eagle Coin listed here with Silver.com is in near-perfect condition. The NGC certifies a coin Mint State 69 if it exhibits full, original mint luster with a maximum of two minor detracting flaws. Those flaws are limited to minuscule contact marks and hairlines outside the primary focal areas.

The Early Release designation pinpoints when a coin was received by the NGC for certification. Coins with an ER label arrived at the NGC or an approved third-party depository within the first 30 days of their release by the United States Mint in 2018.

Gold American Eagle coins feature the famous design of Liberty. Augustus Saint-Gaudens designed this figure of Liberty in 1907 after President Theodore Roosevelt reached out to him for help in revamping American coinage in the early 20th century. Liberty featured here was finished by Saint-Gaudens in 1907, but he died six months before it was released on the $20 Gold Double Eagle.

The obverse of 2018 Gold American Eagle Coins includes the image of Liberty discussed above. Liberty is shown striding forward from the nation’s capital with her torch held aloft, while holding an olive branch in the other hand. The design was featured on the $20 Gold Double Eagle in US circulation from 1907 to 1933.

On the reverse of all 2018 1/10 oz Gold American Eagle Coins is the image of a family of nesting bald eagles. This image is exclusive to the Gold Eagle Series and was created in 1986 by Miley Busiek, a talented artist and sculptor who had created various private and public works prior to her coin design for the US Mint.