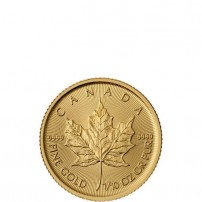 Among the first coins to debut in the Gold Canadian Maple Leaf Series, the 1/10 oz weight has long been a popular coin. It is impossible to know which coins in the collection perform the best because the Royal Canadian Mint doesn’t release sales figures for individual weights. However, 1/10 oz and other smaller fractional weights are often popular among those who wish to buy gold regardless of high or low prices. The 2018 1/10 oz Gold Canadian Maple Leaf Coin is available to you online today for purchase at Silver.com.

The 1/10 oz Gold Maple Leaf isn’t just one of the smallest options in this collection, but it is also one of the first fractional weights introduced into the popular gold bullion series. The Gold Maple Leaf launched as just a 1 oz coin, but in November 1982 the Royal Canadian Mint introduced ¼ oz and 1/10 oz coins as well.

It wasn’t until the 1983 issue that 1/10 oz coins were in full production, making the number of 1982 coins smaller. Since that time though, the 1/10 oz gold coin in the series has been an integral part of the annual releases.

The obverse of all Gold Canadian Maple Leafs features Queen Elizabeth II’s image. Her Majesty has appeared on Canadian coinage since 1952, and on the Gold Maple Leaf since its 1979 debut. Three designs of the Queen have now featured on Gold Canadian Maple Leafs, and this is the fourth-generation design overall. Created in 2003 by Susanna Blunt, it is the only effigy of Elizabeth II in which she is not featured wearing a crown.

On the reverse of all 2018 1/10 oz Gold Canadian Maple Leaf Coins is the sugar maple leaf. An official symbol of Canada since the mid-1800s, and representative of the area dating to the 18th century, the sugar maple leaf appears most prominently on the national flag today. It is surrounded here by engravings of “Canada,” “9999,” and Fine Gold 1 OZ Or Pur.”

All 2018 1/10 oz Gold Canadian Maple Leaf is available to purchase in BU condition. Coins in BU condition have no signs of wear and tear, though there is the potential for minor flaws as a result of the striking process. These flaws range from breaks in the luster and spotted surfaces to contact marks.

We encourage Silver.com customers to call us with questions at 888-989-7223. Our customer service team is also available online via our live chat and email address.