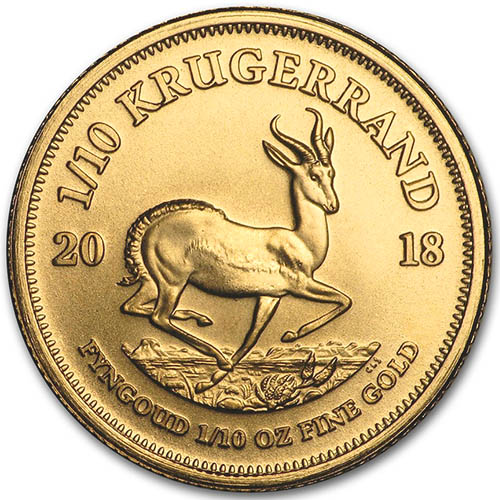 When the South African Mint introduced the Gold Krugerrand fractional weights in 1980, the 1 oz coin alone was the dominant product in the gold bullion coin market. The Krugerrand held 90% of the global gold coin market at this time, with only the Gold Canadian Maple Leaf available as an alternative to the Krugerrand.

The massive success of the Gold Krugerrand from the South African Mint pushed other gold producers around the world to start coining their own gold bullion coins. The Gold Canadian Maple Leaf was the first in 1979, which was followed by the Gold Chinese Panda in 1982, Gold American Eagle in 1986, and Gold Britannia in 1987.

On the obverse of all Gold Krugerrand coins is the left-profile portrait of Paul Kruger. Born Stephanus Johannes Paulus Kruger in 1825, by the late 19th century he was a leading political and military figure in the Boer cause in South Africa. Boer is an Afrikaan word for “farmer,” but was often used to denote the Dutch-speaking settlers who lived on the eastern Cape frontier in South Africa.

The reverse of the 2018 1/10 oz Gold South African Krugerrand Coin is available with the image of a Springbok antelope. The antelope is native to southern and southwestern Africa, and is today known as the national animal of South Africa. The designs on the obverse and reverse sides of the Gold Krugerrand have remained the same in 1967, but were updated in 1984 by Otto Schultz (obverse) and Coert Steynberg (reverse).

Founded in 1890 by Paul Kruger, the South African Mint opened in 1892 as the official sovereign mint. Today it strikes bullion and circulation coins, along with paper bank notes, for the South African Reserve Bank.

We encourage Silver.com customers to reach out to us with questions. You can call us at 888-989-7223, chat with us live online, or email us directly with your inquiries.