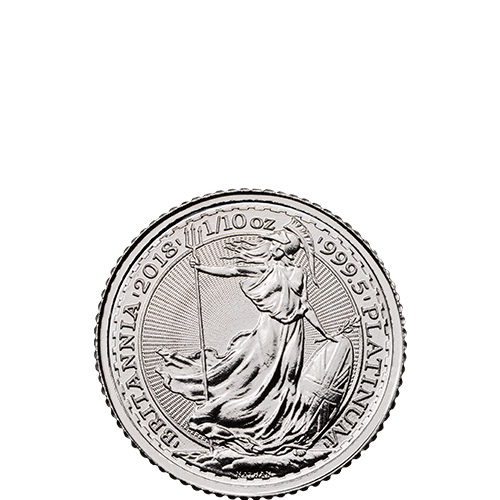 The Royal Mint has rarely tinkered with changes to the Britannia Series of coins. Debuting in 1987, the nation’s official bullion coin program originally featured only a gold coin option. In 1997 a silver coin was added to the series. Now, the Royal Mint has followed up its 30th anniversary celebration in 2017 with brand-new platinum coins in the Britannia Series for 2018. Today, the 2018 1/10 oz Platinum British Britannia Coin is available to you at Silver.com.

When you purchase the all-new 2018 1/10 oz Platinum British Britannia Coin today, you have multiple options for quantity. Individual coins are available to you in protective flips, or you can make bulk purchases. Multiples of 25 will ship inside of sealed mint tubes, or you can purchase mint-sealed boxes of 500 coins.

Regardless of how much you purchase, each individual Platinum British Britannia coin on offer to you here today is in BU condition. Coins in this condition show no signs of wear and tear from handling, however it is possible for minor production flaws to exist. These flaws typically range from breaks in the luster and spotted surfaces to contact marks.

The is the first-ever issue of the Britannia coin in platinum. The Royal Mint makes the beautiful Britannia design, the origins of which date back to the Roman Era of rule in the first century AD, available to those who enjoy investing in platinum. Along with the issue of these coins, the Royal Mint is expanding the use of its radial sunburst anti-counterfeiting design, which appears on the reverse background field.

On the reverse of 2018 1/10 oz Platinum British Britannia Coins is the image of Britannia. Her name comes from a Latinization of the word Pretani, which was the native Brittonic word for the island itself. When the Romans invaded the British Isles, Pretani became Britannia as the official name for the province in Roman Britain.

The obverse of the Platinum British Britannia Coin includes the fifth-generation right-profile portrait of Queen Elizabeth II. Designed in 2015, Royal Mint Engraver Jody Clark became the youngest individual to complete the Queen’s effigy for coinage at the age of 33.

Please feel free to reach out to Silver.com with your questions. You can call us at 888-989-7223, chat with us live online, or send us your emails. In addition to silver and gold, you can also find live platinum prices listed on our website.