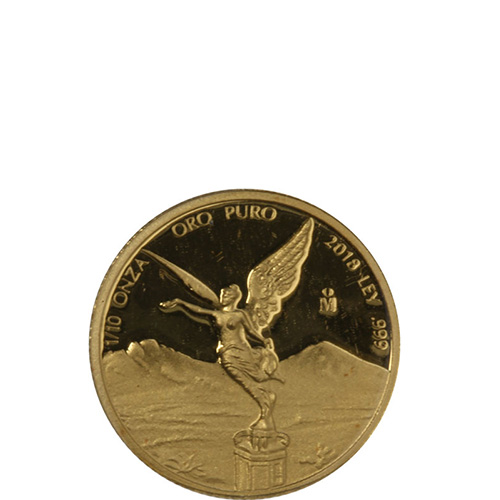 Gold Mexican Libertad coins have been available from the Mexican Mint since 1981, but the regularity of the production for the different versions has varied. For example, the bullion coins debuted in 1981, were issued for four years in the 1990s, and didn’t become annual issues until 2002. The Proof Gold Libertads have only been an annual issue since 2005. Today, 2018 1/10 oz Proof Gold Mexican Libertads are available to you online at Silver.com.

All of these 2018 1/10 oz Proof Gold Mexican Libertads are available to you with frosted designs overlaying mirrored background fields. The coins are housed individually in this release in a protective plastic capsule.

On the reverse side of 2018 1/10 oz Proof Gold Libertads is a modern version of the Mexican coat of arms. The image depicted here includes the powerful golden eagle battling with a serpent from its perch on a cactus. “Estados Unidos Mexicanos” is engraved above the design of the seal, with a wreath below to frame the seal.

Please don’t hesitate to reach out to Silver.com if you have any questions about buying gold. You can call us on the phone at 888-989-7223, chat with us live online, or simply email us directly.