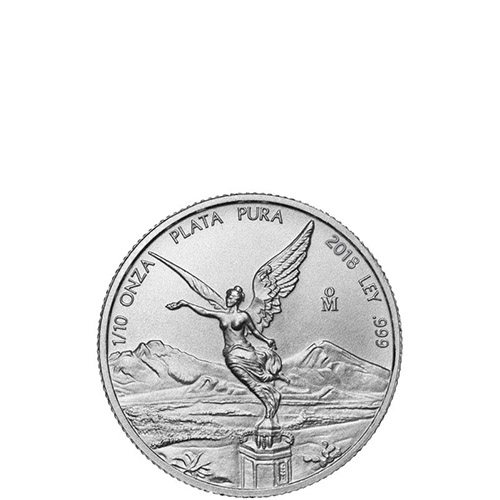 When shopping for silver online, the Silver Mexican Libertad coin is a great option for any investor. Featuring an iconic design on the obverse and bearing government-backed silver content, the Libertad Series is the official bullion coinage of the nation of Mexico. Right now, 2018 1/10 oz Silver Mexican Libertad Coins are available for purchase online at Silver.com.

Each 2018 1/10 oz Silver Mexican Libertad Coin in this Silver.com listing is available to you in BU condition. Coins in this condition exhibit no signs of wear and tear on the surface areas or design elements, though could feature minor detracting flaws. However, these flaws are limited to breaks in the luster, spotted surfaces, and contact marks.

Silver Libertad coins feature the designs found on the original gold Centenario coin. Released in 1921 by the Mexican Mint to commemorate the nation’s centennial of independence, the Centenario featured an original depiction of Winged Victory facing forward while the coat of arms was found on the back.

Today’s Silver Libertad coins feature a modernized version of Winged Victory, with her figure captured in left-profile relief as found on the Mexican Independence Victory Column. The column is located in the center of Mexico City and was erected in 1921 to commemorate independence.

On the obverse of 2018 1/10 oz Silver Mexican Libertad Coin is that new design of Winged Victory. Her figure is reflective of the 22-foot tall statue of the goddess of Victory found atop the victory column, and in the background you can see the twin volcanic peaks of Popocatepetl and Izztacihuatl.

The reverse of Silver Mexican Libertad fractional-weight coins features the modern coat of arms for Mexico. This design features an eagle locked in conflict with a snake, and the engraving of “Estados Unidos Mexicanos” is featured above. This translates as United Mexican States.

The Mexican Mint is located in Mexico City and was founded in 1535. The mint is controlled by the federal government and overseen by Banco de Mexico, with the power to coin currency for the nation and print official banknotes. The Mexican Mint is the oldest operating mint in the Western Hemisphere.

If you have any questions for our customer service team, don’t hesitate to ask. Silver.com customer service is available at 888-989-7223, online using our live chat, and via our email address. The latest price of silver is constantly updated on our homepage as well!