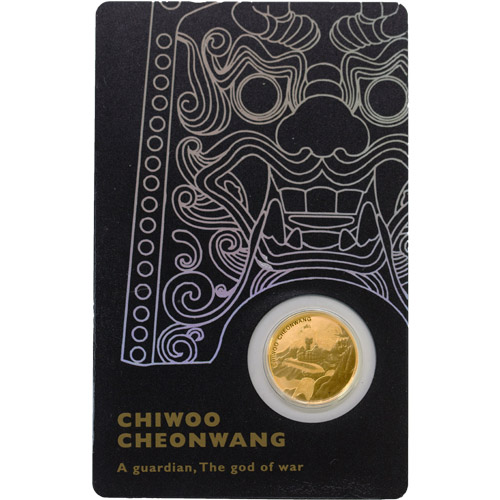 In the South Korean Chiwoo Cheonwang Series, KOMSCO introduces the famed God of War from Chinese and Korean mythology whose exploits were based upon the real-life accomplishments of one of the leaders of ancient China’s founding tribes. Chiwoo is depicted in a new design relief on the reverse each year. The 2018 1/10 oz Gold South Korean Chiwoo Cheonwang Medallion is currently available to you for purchase online at Silver.com with the black-label assay card.

KOMSCO uses a progressive design approach for the Chiwoo Cheonwang Series of silver and gold medallions. The first design issued in 2016 depicted Chiwoo in his full battle armor as he waited for his war steed to be brought to him. In 2017, the second design concept captured Chiwoo mounting his horse and preparing to ride into battle.

For the third design in the series, the 2018 Chiwoo Cheonwang design captures Chiwoo as he rides into battle leading his forces to victory. The God of War, as he is historically known, is depicted with a fearsome look on his face as he lowers his sword to kill enemy soldiers.

On the reverse of the 2018 1/10 oz Gold South Korean Chiwoo Cheonwang Medallion is the image of the God of War on his battle horse. The God of War is depicted with his sword low to his side in one hand as he swings it to cut down enemies all around him. This angle of design is likely reflective of the view enemies had of Chiwoo right before he vanquished them in battle.

The obverse of all 2018 Gold Chiwoo Cheonwang Medallions features the common design element of Do ggae bi. The specific design featured here reflects the battle shield used by Chiwoo Cheonwang which includes the face of the grotesque creature. His image is considered so hideous it is believed to ward off evil spirits.

These 2018 1/10 oz Gold South Korean Chiwoo Cheonwang Medallions have a black label assay card with the weight, purity, and metal content featured on the card. This is one of four colorized assay cards, with the mintage of 5,000 medallions evenly distributed between black, white, blue, and red labels.

We encourage Silver.com customers to contact us with questions at 888-989-7223. You can also chat with us live online or simply send us an email.