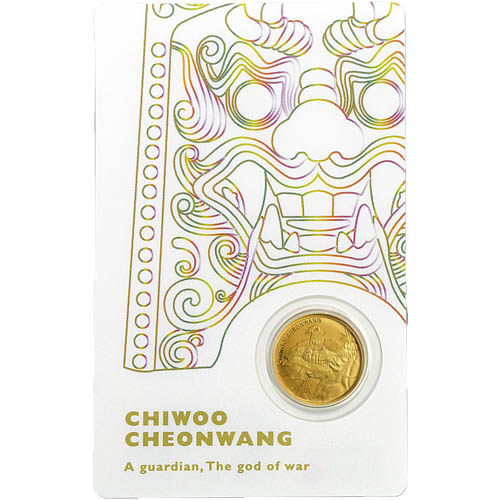 The third issue year of the Gold Chiwoo Cheonwang medallions brings collectors one step closer to the battlefield with the God of War. The progressive designs in the series follow Chiwoo in his preparation for battle, with the third design in 2018 following him right onto the field of war. Today, 2018 1/10 oz Gold South Korean Chiwoo Cheonwang Medallions are available to you online at Silver.com with white-label assay cards.

The designs of the Chiwoo Cheonwang Series from KOMSCO follow a progressive approach, depicting Chiwoo on the obverse in a different relief each year as he readies himself and his armies for battle. Following the first two releases, Chiwoo finally rides into battle on his warhorse in the third release.

All of the 2018 1/10 oz Gold South Korean Chiwoo Cheonwang Medallions available to you here today come with an assay card that has a white label design. The weight, purity, metal content, and year of issue for the gold bullion medallion are reflected on the white label assay, with the mintage of 5,000 evenly split between white, blue, black, and red label assays for the year.

On the obverse of all 2018 Gold South Korean Chiwoo Cheonwang Medallions is the image of Do ggae bi. Popular during the Silla Dynasty, the grotesque face of Do ggae bi was rumored to have the power to ward off evil spirits and would often be hung from the roofing tiles of homes for protection. In this series, it is featured as it appeared on Chiwoo’s battle shield.

The reverse of 2018 1/10 oz Gold South Korean Chiwoo Cheonwang Medallions, you’ll find the third image of Chiwoo in the series. He is depicted here riding his warhorse into battle and lower his sword to cut down enemies. This is the last view of Chiwoo that many of his enemies had before their death. Chiwoo was an accomplished general and earned mythical status as the God of War because it was believed he could control the elements and summon fog to cloud the battlefield.