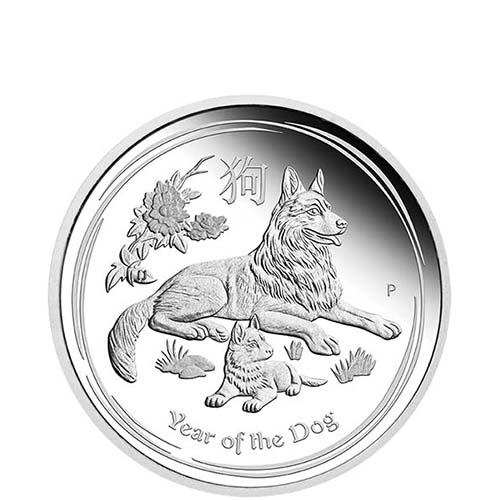 Perth Mint’s Lunar Series II collection of gold and silver coins go well beyond the bullion offering. With each new design release in the series there is also a limited-issue release of proof coins in the collection. Aimed at collectors, these coins are highly coveted for the fact that a new design is available each year. Right now, the 2018 1/2 oz Proof Silver Australian Dog Coin is available to purchase online at Silver.com.

All 2018 1/2 oz Proof Silver Australian Dog Coins are presented to you inside of the Perth Mint’s beautiful red-and-black clamshell case for easy display. Each clamshell containing your coin is shipped inside of a Lunar Series II-themed presentation box and includes a numbered Certificate of Authenticity.

The Lunar Series II Proof Silver Australian Dog coin features a design from Ing Ing Jong, the leading designer in the series. Hired by the Perth Mint as a coin designer in 2011, Jong was elevated to designing the silver and gold imagery used in the Lunar Series II collection starting in 2013. Her designs for the silver and gold series are different with each release, for each metal.

The reverse of all 2018 1/2 oz Proof Silver Australian Dog Coins includes Jong’s image of two German Shepherds. The pair are featured lying in a field with a Chinese peony flower in the background, and include an adult in the back and a young puppy in the front.

On the obverse of all 2018 Proof Silver Australian Dog Coins is the design of Queen Elizabeth II’s effigy. Her Majesty appears on the obverse of all Australian coinage, with this particular design reflecting the fourth-generation image of the Queen to appear since 1952. It is a 1998 creation from Ian Rank-Broadley.

Perth Mint is the oldest mint in Australia, and opened as a Royal Mint facility in 1899. Owned by the state of Western Australia since 1970, it is independent of the federal government’s Royal Australian Mint in Canberra.