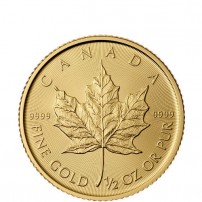 Each 2018 ½ oz Gold Canadian Maple Leaf Coin available to you today is in BU condition. Coins in BU condition exhibit no signs of wear and tear. However, it is possible for minor flaws to exist as a result of the coining process. These range from breaks in the luster and spotted surfaces to contact marks.

The Gold Canadian Maple Leaf debuted in 1979 as a 1 oz gold coin with .999 fine gold content. Several changes have occurred in the series since then, but never in the basic designs. In November 1982, the gold content was increased to .9999 fine purity. Additionally, the first fractional weights were introduced.

The obverse of all 2018 ½ oz Gold Canadian Maple Leaf Coins features Queen Elizabeth II. Her Majesty’s effigy has featured on all Canadian coinage dating to 1952. This is the fourth-generation design, and third to appear on Gold Maple Leaf coins, created in 2003 by Susanna Blunt.

The Royal Canadian Mint opened its doors in 1908 in the city of Ottawa, the federal capital of Canada. Today, a second facility exists in Winnipeg that opened in the 1980s.

If you have any questions, please feel free to contact Silver.com. We’re available at 888-989-7223, online using our live chat, and via email.