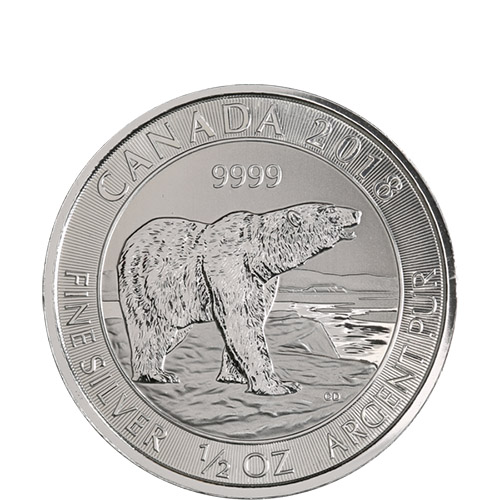 Any quantity available for $2.99 per coin over spot!

The 1/2 oz Silver Canadian Polar Bear coin is a popular silver bullion issue from the Royal Canadian Mint that has featured various designs when issued in the past. The 2018 issue in the series features the massive polar bear in its native habitat, an environment that is under attack as its habitat changes. Right now, 2018 1/2 oz Silver Canadian Polar Bear Coins are available to purchase online at Silver.com.

Each individual 2018 1/2 oz Silver Canadian Polar Bear coin is available to you here in Brilliant Uncirculated condition. These coins come with either an individual protective flip, tube of 20, or box with 240 coins.

The polar bear is similar in size to the Kodiak bear and a sister species to the common brown bear, however, it has adapted numerous physical features to help it cope with life in the Arctic Circle. Unlike other bears, polar bears are considered a vulnerable species because of habitat loss around the world, much of which is the result of melting ice caps.

On the obverse of 2018 1/2 oz Silver Canadian Polar Bear Coins is the image of Queen Elizabeth II. Her Majesty is featured here in a right-profile relief design wearing no crown. This is the first design of a monarch for Canadian coinage since the 1930s to feature the monarch without a crown. It was designed in 2003 by Susanna Blunt.

The reverse side of 2018 Silver Canadian Polar Bear coins includes the image of a bear standing at the edge of an ice shelf. A mountain chain is visible in the background across an open body of water as the bear surveys its territory, no doubt looking for food. Oddly enough, polar bears are classified as a marine species because they spend most of their adult life in the water traveling between ice shelves and nearby landmasses hunting for seals.

Founded in 1908, the Royal Canadian Mint is the sovereign mint of Canada. It operates its original facility at the Ottawa Mint produce bullion and numismatic coinage, while its newer Winnipeg Mint produces circulation currency for the country.