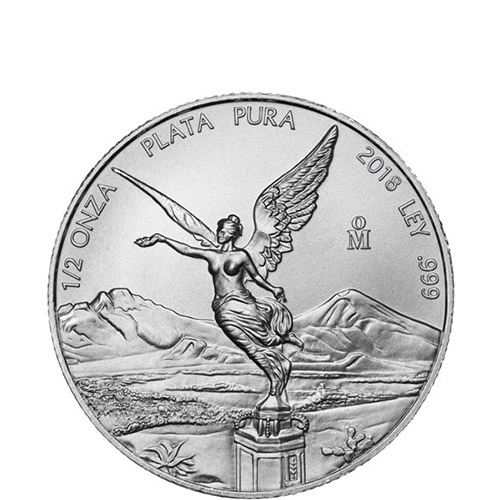 Any quantity available for $6.29 per coin over spot!

Silver Mexican Libertad coins feature beautiful imagery on both sides which are important to the people of Mexico. Winged Victory on the obverse is based upon the Roman goddess of victory, and her figure was revised for use in Mexico to reflect the struggle for freedom from Spanish colonial rule in the 19th century. Today, 2018 ½ oz Silver Mexican Libertad Coins are available to you online at Silver.com.

The ½ oz Silver Mexican Libertad coin is one of four fractional-weight options available today from the Mexican Mint. The series began in 1982 as just a 1 oz silver coin collection and expanded after a decade to include these ½ oz coins, ¼ oz, 1/10 oz, and 1/20 oz options by 1991. Throughout the last three decades, the coins have had highs and lows in mintage figures.

Silver Libertads are, in general, struck at levels much lower than other major bullion coins. For example, the 2007 ½ oz coin had a mintage of just 3,500 coins. In the 21st century, the ½ oz Silver Libertad has never surpassed 35,000 coins in any individual year, and that occurred during 2002.

All 2018 ½ oz Silver Mexican Libertad Coins available to you today are in BU condition. Coins in this condition have no indications of wear and tear as a result of handling. However, minor production flaws such as breaks in the luster, spotted surfaces, and contact marks are possible in BU coins.

The obverse of the Silver Mexican Libertad coin always features the image of Winged Victory. This depiction of Victory was modernized in the 21st century by the mint and captures her image as she appears on the Mexican Independence Victory Column, which was erected in 1921 in Mexico City to mark the nation’s centennial independence celebration.

On the reverse of all 2018 ½ oz Silver Mexican Libertad Coins is the image of the coat of arms. It is surrounded on the bottom by a laurel wreath with an engraving of “Estados Unidos Mexicanos,” or United Mexican States, above.

Please don’t hesitate to reach out to Silver.com if you have questions about our silver catalog. You can call us on the phone at 888-989-7223, chat with us online through our live chat, or simply send us an email with your inquiries. The price of gold and silver are available online through our website at any time.