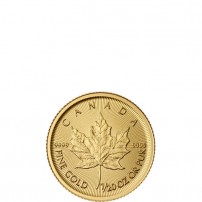 Each 2018 1/20 oz Gold Canadian Maple Leaf listed here today is in BU condition. Coins in BU condition exhibit no signs of wear and tear, though you may notice a range of minor flaws such as breaks in the luster, spotted surfaces, and contact marks. These are all possible issues resulting from the normal coining process at the mint.

Gold Canadian Maple Leaf coins debuted in 1979, but at the time there was only a 1 oz gold coin available with .999 purity. Over the years, the Royal Canadian Mint has expanded and upgraded the coin series. The use of .9999 pure gold came in November 1982, at which time the first two fractional-weight coins were added.

It wasn’t until 1993 that the 1/20 oz Gold Canadian Maple Leaf was added to the collection. It was the last fractional-weight introduced into the program without being removed later. A 1/15 oz coin was added just for 1994 that celebrated the 25th anniversary of the collection. There is also a 1 Gram coin now available as of 2014.

On the reverse of all 2018 1/20 oz Gold Canadian Maple Leaf Coins you’ll find the sugar maple leaf. Canada’s official symbol since the mid-19th century and a known symbol of the region dating to the 18th century, the sugar maple leaf is included with a background of radial lines to deter counterfeiting.

The obverse of all Gold Canadian Maple Leaf Coins features the image of Queen Elizabeth II. Her Majesty is featured on the obverse of all Canadian coinage, bullion collectible and circulation alike. This is the fourth-generation effigy of the Queen, and was created in 2003 by Susanna Blunt.

If you have any questions, please don’t hesitate to ask. Silver.com customer service is available to help you on the phone at 888-989-7223, on the web using our live chat feature, and via our email address.