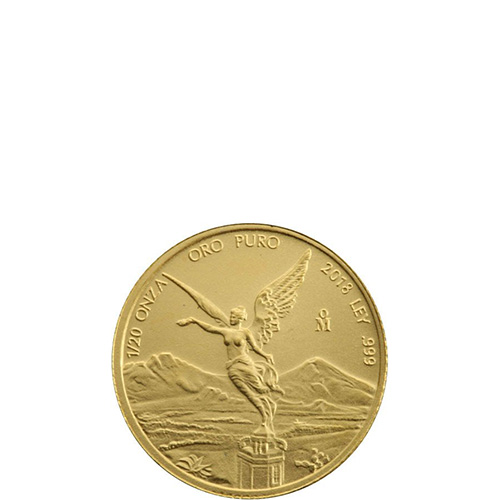 The smallest weight available in the Gold Libertad Series from the Mexican Mint is the 1/20 oz coin. With a total of five weights to choose from, the Gold Libertads are a great option for any investor looking to buy gold. Right now, 2018 1/20 oz Gold Mexican Libertad Coins are available to purchase online at Silver.com.

Each of the 2018 1/20 oz Gold Mexican Libertad Coin in this product listing from Silver.com is available in BU condition. Coins in BU condition exhibit no indications of wear and tear on the surface areas or design elements. However, minor flaws from the coining process are possible and consist of breaks in the luster, spotted surfaces, and contact marks.

On the obverse of all Gold Mexican Libertad coins is the effigy of Winged Victory. Captured in a slight left-profile relief, this is a depiction of Winged Victory based upon the goddess of Victory as found on the Mexican Independence Victory Column in Mexico City. The column and statue were erected in 1921 to celebrate the 100th anniversary of the nation’s freedom.

The reverse of 2018 1/20 oz Gold Mexican Libertad Coins feature the coat of arms for Mexico. The fractional-weight Gold Libertads bear only the modern version of the coat of arms, while larger-weight coins have a surrounding design that includes 10 historic versions of the seal’s design.

If you have any questions, feel free to reach out to Silver.com. Our customer service team is available at 888-989-7223, online through our live chat, and at our email address.