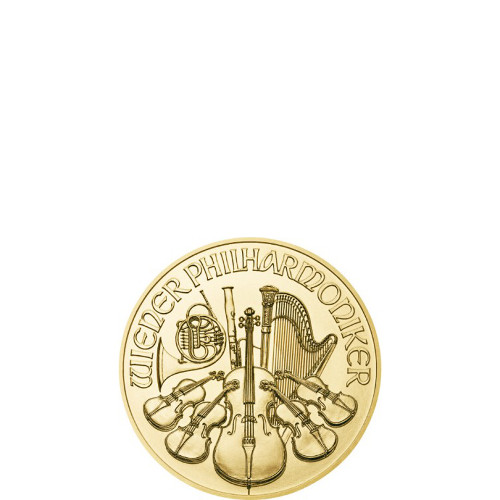 The Austrian Mint has introduced a total of three special-issue Gold Austrian Philharmonic coins over the course of three decades of production, but only one of these gold coins has stuck around as an annual release. The 1/25 oz coin debuted in 2014 on the program’s 25th anniversary, and remains today as an annual issue coin. Today, 2018 1/25 oz Gold Austrian Philharmonic Coins are available to you at Silver.com.

Over the course of 30 years of availability, the Austrian Mint has released a total of three special-issue, anniversary coins in the collection. The first of these was the so-called Big Phil, issued in 2004 on the 15th anniversary of the series. It featured 1,000 Troy ounces of .9999 fine gold with a face value set at €100,000.

The next coin was the 20th anniversary Gold Philharmonic. Fittingly, this coin included 20 Troy ounces of .9999 fine gold with a nominal face value of €2,000. Neither of these coins, for obvious reasons, remained as a standard issue in the series. The 1/25 oz Gold Austrian Philharmonic Coin was the latest release, and its diminutive size means it had staying power.

All 1/25 oz Gold Austrian Philharmonic Coins stem from the 2014 debut of the small coin for the 25th anniversary of the program. Although much smaller than other celebratory issues, you’ll at least still find this one available each year.

Your purchase of the 2018 1/25 oz Gold Austrian Philharmonic in this listing entitles you to a BU condition coin. Coins in this condition show no signs of wear and tear, but can feature minor production flaws. These range from breaks in the luster and spotted surfaces to contact marks.

On the obverse of the Gold Austrian Philharmonic is the pipe organ in the Musikverein. Also known as the Golden Hall, this concert venue is the home of the Vienna Philharmonic Orchestra and is found in the Innere Stadt borough of Vienna, the nation’s capital.

The reverse of the 2018 1/25 oz Gold Austrian Philharmonic Coin includes nine different musical instruments. In total, you’ll find one cello, front and center, with four violins, a Vienna horn, bassoon, and harp flanked around it. All 1/25 oz Gold Philharmonics are available either in individual flips or mint tubes of 20 coins bearing tamper-evident seals introduced by the Austrian Mint in 2017.

Please feel free to reach out to Silver.com with questions. Our team is standing by on the phone at 888-989-7223, online using our live chat, and via email.