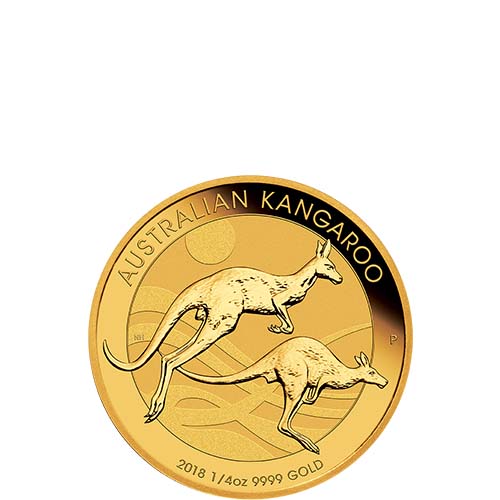 The Gold Kangaroo Coin is the Perth Mint’s oldest continuously offered bullion coin program. Originally offered as the Gold Nugget coin in 1986, these 1 oz gold coins now feature the image of kangaroos on the reverse and are available in a variety of weights with each new release year. Today, 2018 1/4 oz Gold Australian Kangaroo Coins are available to you online at Silver.com.

Gold Kangaroo coins were initially offered from 1986 to 1989 as the Gold Nugget, in large part because of the nation’s deep history of gold mining and its rich gold reserves. Western Australia was home to the nation’s largest gold rush, and the Gold Nugget was meant to highlight this point in Australian history and promote its existing gold reserves.

Since 1990, the coins have been offered as the Gold Australian Kangaroo with a new image of the native marsupial species on the coin’s reverse side. This coincided with the introduction of the now-popular Silver Australian Kookaburra, leading a charge in coin design changes featuring native creatures.

All 2018 1/4 oz Gold Australian Kangaroo Coins are available in BU condition. Coins in this condition show no signs of wear and tear, but flaws as a result of the production process are possible. These are limited to breaks in the luster, spotted surfaces, and contact marks.

On the reverse of the 2018 1/4 oz Gold Australian Kangaroo Coin is the image of the red kangaroo. This year’s design includes two kangaroos as they leap across a rural landscape theme, and included inscriptions of “Australian Kangaroo” and the “P” mint mark of the Perth Mint.

The obverse of the Gold Australian Kangaroo coins features the right-profile portrait of Queen Elizabeth II. Her Majesty is featured on the obverse of these coins in her fourth-generation effigy, which was created in 1998 by Ian Rank-Broadley.

Founded in 1899, the Perth Mint was established as the third and final Royal Mint facility. Today it stands as the oldest operating facility in the country and operates separately of the Royal Australian Mint, the sovereign minting location in Canberra.

Please don’t hesitate to contact Silver.com with questions. Our customer service team is available at 888-989-7223, online through our live chat, and via our email address.