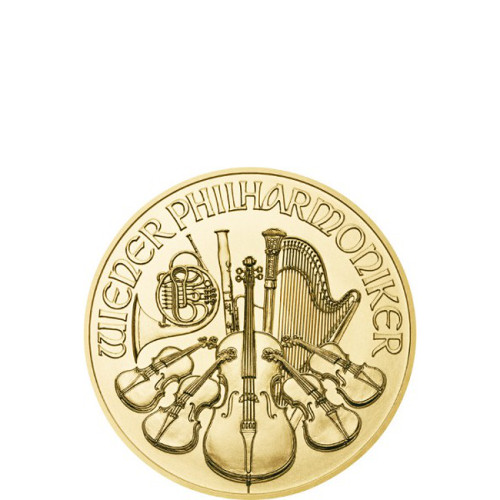 Since the introduction of the Gold Philharmonic in 1989, the Austrian Mint has sold well over 9.6 million Troy ounces of gold in this series. The coins were the most popular in Europe and second in the world in 1990, and earned status as the best-selling coin in the world in 1992, 1995, 1996, and 2000.

On the obverse of all 2018 ¼ oz Gold Austrian Philharmonic Coins is the image of the Pipe Organ inside of the Musikverein Golden Hall in Vienna. This is the home theater of the Vienna Philharmonic Orchestra, which was officially formed in 1842 and has been performing with regularity around the world since then.

The reverse of the Gold Austrian Philharmonic Coin includes a collection of orchestral instruments commonly used during performances. You’ll find a cello, four violins, the Vienna horn, a bassoon, and a harp. Engravings on both sides of the coin are in German, Austria’s native tongue, and include the name of the orchestra and nation of issue.

Your 2018 ¼ oz Gold Austrian Philharmonic Coin purchased in this listing comes in BU condition. Coins in this condition have no signs of wear and tear, but you may notice a range of minor flaws including breaks in the luster, spotted surfaces, and contact marks. These are normal flaws possible from the striking of die during production.

We encourage Silver.com customers to contact us with questions when buying gold. Feel free to call us at 888-989-7223, connect with us on the web through our live chat, or send us an email with your inquiries.