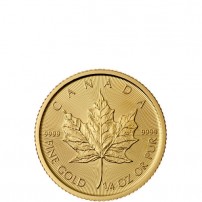 The first fractional-weight coins came to the Gold Canadian Maple Leaf Series in 1986, just three years after the program launched with its one ounce coin. Today, the fractional weights are particularly popular among investors who want to spread their investments across various coin series. Today, 2018 ¼ oz Gold Canadian Maple Leaf Coins are available to you online at Silver.com.

It didn’t take long for the Royal Canadian Mint to expand on its popular Gold Maple Leaf series. What started in 1979 as a 1 oz gold coin program with .999 content, grew in 1982 to feature a ¼ oz and 1/10 oz coin as well. As of that same year, all coins in the series now feature .9999 gold content.

Over the following years, the Royal Canadian Mint continued to expand the series. The Gold Maple Leaf grew again in 1993 to include a 1/20 oz coin, featured a 1/15 oz coin just for the 1994 release celebrating the program’s 15th anniversary, and now features a 1 Gram coin as well as of 2014.

Your 2018 ¼ oz Gold Canadian Maple Leaf Coin is available for purchase in BU condition. Coins in this condition show no signs of wear and tear, but minor flaws are possible as a result of the production process. These range from breaks in the luster and spotted surfaces to possible contact marks.

The obverse of the 2018 Gold Canadian Maple Leaf coins features the 2003 depiction of Queen Elizabeth II. This design represents the fourth-generation effigy of Her Majesty, and was created as the first in the history of Elizabeth II portraits on Canadian coins without a crown on the Queen’s head.

On the reverse of the 2018 ¼ oz Gold Canadian Maple Leaf Coin is the design of the sugar maple leaf. Captured in its full glory, the maple leaf dominates the reverse design and you can see all of the lines and veins of the leaf. Engravings identify the nation of issue, weight, metal content, and purity.

The Royal Canadian Mint was founded in 1908 to give Canada independent control of its coining operations. The first mint was built in Ottawa, and there is now a second facility located in the city of Winnipeg.