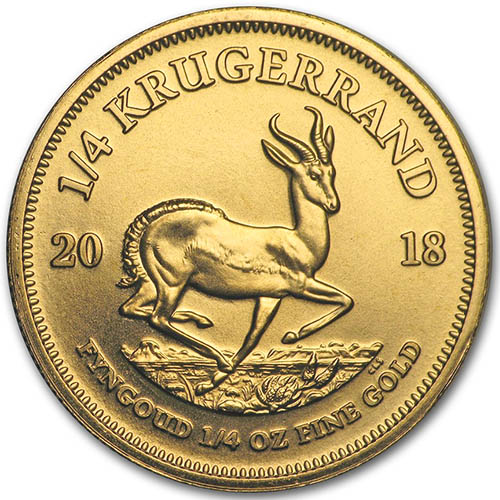 In 1980, with the Krugerrand at its highest points, the South African Mint introduced three fractional-weight coins. The ¼ oz coin was among those fractional weights, all of which have helped contribute to more than 50 million ounces of Gold Krugerrand coins sold since 1967.

All 2018 Gold South African Krugerrand coins in this listing from Silver.com are in BU condition. Coins in BU condition show no signs of wear and tear, but you may notice a range of minor flaws as a result of the production process. These flaws are limited in nature to breaks in the luster, spotted surfaces, and contact marks.

The obverse of all Gold Krugerrand coins feature the image of the man the series is named after. Paul Kruger was a leading Boer in the late 19th century in South Africa, serving as President of South Africa from 1883 to 1900. The name of the coin came from the combination of Kruger’s name and the national currency of the rand.

On the reverse of 2018 ¼ oz Gold South African Krugerrand Coins you’ll find the depiction of a Springbok antelope. The national animal of South Africa, this species has long called the southern tip of the African continent home.

The South African Mint is the official sovereign mint of South Africa and is responsible for the coining of both bullion and circulation currency. The mint strikes coinage and paper banknotes for the South African Reserve Bank.

Please don’t hesitate to contact Silver.com at 888-989-7223 with questions. You can also reach out to us online through our live chat and email features. Don’t forget to research gold prices on our website when buying!