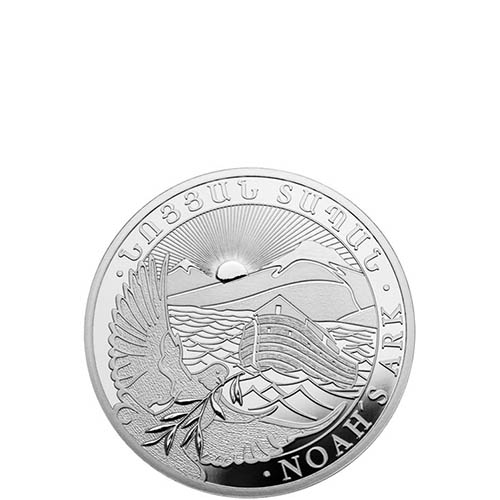 Mount Ararat, and to greater degree the Christian faith, are deeply connected to the Republic of Armenia. The modern nation of Armenia was once divided among Turkey and the Soviet Union. At the conclusion of World War I, the land in Armenia that included Mount Ararat was split down the center of the mountain by the emerging Turkish nation and the growing Soviet Union.

Moreover, Armenia has a rich history with the Christian faith. The nation was among the first modern nations of the world to adopt Christianity as an official religion of the nation. Today, the biblical scene graces the reverse side of the nation’s official silver bullion coin collection.

All 2018 ¼ oz Silver Armenian Noah’s Ark Coins are available in BU condition. Coins in BU condition show no signs of wear and tear, but minor flaws are a possibility. Breaks in the luster, spotted surfaces, and contact marks as a result of the production process may be present on BU condition coins.

The obverse of all Silver Armenian Noah’s Ark Coins includes the replica of the national coat of arms. This symbol includes the national shield in the center, which itself features a small depiction of the ark resting atop Mount Ararat at its center. Engravings include the name of the nation, “Republic of Armenia,” in both English and Armenian. You’ll also find the face value, weight, purity, and metal content of the coin.

On the reverse of all 2018 ¼ oz Silver Armenian Noah’s Ark Coins is the image of the ark as its floats along the flood waters. After 40 days of rain and flooding, the sun is finally visible rising above the tops of Mount Ararat in the background as a dove returns to the ship with an olive branch in its beak. This is a sign that dry land is available to dock the ship upon.

Please feel free to reach out to Silver.com with questions. You can call our customer service team at 888-989-7223, chat with us live online, or simply send us an email.