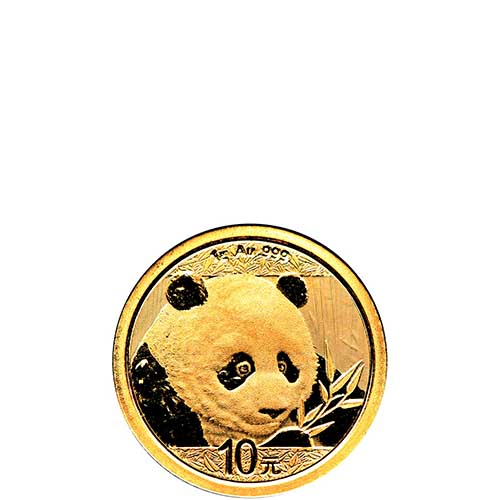 The Chinese Mint introduced the Gold Panda coins in 1982. There were four weights available for that first year, ranging from 1 oz and 1/2 oz to 1/4 oz and 1/10 oz. The 1/20 oz coin, now the 1 Gram Gold Chinese Panda, was introduced in 1983. These coins are all struck annually, with the Chinese Mint having occasionally released 5 oz and 12 oz weighted coins as well.

Your 2018 1 Gram Gold Chinese Panda Coin is available in BU condition. Coins in BU condition have no signs of wear and tear, but that does not make them perfect. BU coins do have the potential for production flaws that range from breaks in the luster and spotted surfaces to contact marks.

The Giant Panda is the focus of the Gold Panda bullion series from the Chinese Mint. Though not an official symbol of the nation, outside of the People’s Republic of China the Giant Panda is closely associated internationally with the nation and was used in four mascots created for the 2008 Summer Olympics held in Beijing.

On the obverse of the 2018 1 Gram Gold Chinese Panda Coin is the design of a panda’s face. The Giant Panda, a bear species more closely related to raccoons than other bears genetically, is native to China and is located in the highlands of central China.

The reverse of Gold Chinese Panda Coins feature the same design each year with no changes. On this face is the outer facade of the Hall of Prayer for Abundant Harvests, which is the largest building in the Temple of Heaven complex constructed in Beijing between 1406 and 1420.

All Gold Panda and Silver Panda Coins issued each year by the People’s Republic of China are created by the Chinese Mint. With four locations throughout the country, it produces paper money and bullion coinage under the oversight of the People’s Bank of China.

Please feel free to reach out to Silver.com with your questions about gold coins. You can call us at 888-989-7223, chat with us live online, or simply send us an email.