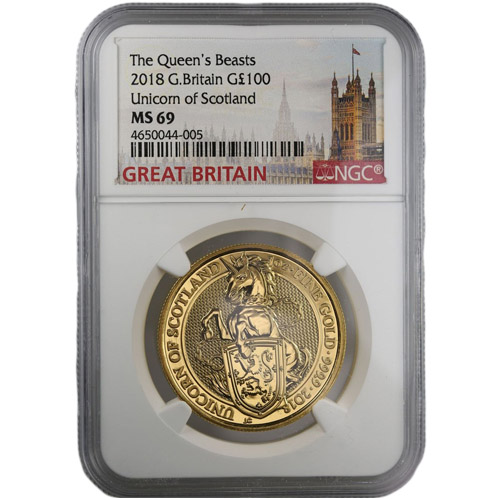 In the first four releases of the Queen’s Beast Collection from the Royal Mint, many of the most important heraldic beasts in royal and national history have featured. The Lion of England was the debut release, and the status of Wales and Scotland in the United Kingdom have also been reflected in their respective heraldic beasts. Right now, 2018 1 oz Gold British Queen’s Beast Unicorn Coins are available to purchase online at Silver.com.

Each of the 2018 1 oz Gold British Queen’s Beast Unicorn Coins in this listing is in near-perfect condition according to the NGC. Coins with a Mint State 69 certification exhibit full, original mint luster with a maximum of two minor detracting flaws. These minor flaws are limited to minuscule contact marks or hairlines outside the primary focal areas of the coin’s design elements.

The Unicorn of Scotland is the fourth issue in the bullion series of coins in the Queen’s Beast Range. The collection features silver, gold, and platinum coins. The silver issues include a 2 oz and 10 oz silver coin, with just a 1 oz platinum coin available in that metal. For the Gold Queen’s Beasts, there are ¼ oz and 1 oz gold options.

On the reverse of the 2018 1 oz Gold British Queen’s Beast Unicorn Coin you’ll find the Unicorn of Scotland standing over the royal arms. The unicorn itself wears a coronet around its neck with a strong, golden chain. The shield it supports has the rampant lion, which is considered the fiercest stance of the lion in heraldry.

The obverse of all coins in the British Queen’s Beast range include a fifth-generation depiction of Queen Elizabeth II. Created by Jody Clark in 2015, this is the latest portrait of the Queen on British coinage and captures Her Majesty at 89 years old. Clark, just 33 at the time, is the youngest Royal Mint Engraver to complete a monarch’s effigy.

If you have any questions about our gold coins, please don’t hesitate to ask. Silver.com associates are available at 888-989-7223, online using our live chat, and via our email address.