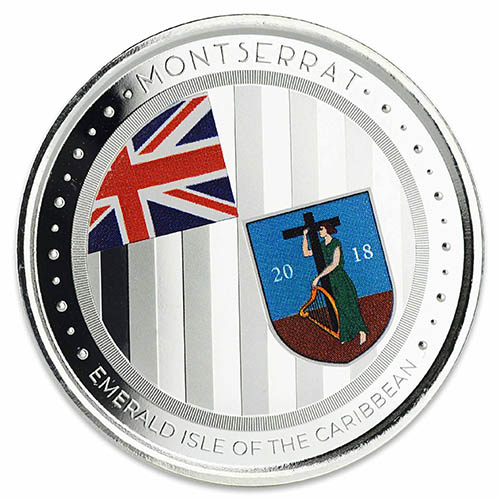 The 1 oz silver coins of the EC8 Caribbean Series from the Scottsdale Mint have proven incredibly popular following the 2017 debut of the series. The collection represents each of the nations within the Eastern Caribbean Central Bank Zone and offer unique designs for each nation on silver bullion and colorized silver bullion coins. Right now, 2018 1 oz Colorized Silver Montserrat Emerald Isle of the Caribbean Coins are available to purchase online at Silver.com.

Each of these 2018 1 oz Colorized Silver Montserrat Emerald Isle of the Caribbean Coins are available to you in Brilliant Uncirculated condition and comes with a colorized lacquer finish on the reverse design elements. The coins are individually housed within protective capsules and come with a custom mint box. The coins also include a Certificate of Authenticity reflecting the unique serial number of each coin.

The EC8 Caribbean Series launched in 2017 with the Antigua & Barbuda Rumrunner coin. In 2018, the Scottsdale Mint has issued Saint Kitts & Nevis and Dominica coins individually. With the release of the fourth and fifth coin though, designs for Grenada and Montserrat arrive at the same time. This gives investors the choice between silver bullion, colorized silver bullion, gold bullion, and colorized gold bullion coins in both designs all at once.

On the reverse of 2018 Colorized Silver Montserrat Emerald Isle of the Caribbean Coins is the image of the flag of the United Kingdom and Montserrat’s coat of arms. The island nation is a British Overseas Territory and includes the British Union flag, colorized with its blue background and red-and-white cross.

Included on the reverse is the coat of arms for Montserrat. This design includes the woman known as Erin, the female personification of Ireland, on the crest as she holds a cross and a harp. Montserrat is known as the Emerald Isle of the Caribbean due to its similar geography along the coastlines as Ireland. Many early Europeans brought to Montserrat by the British were Irish prisoners, indentured servants, and forced laborers.

The obverse of all 2018 1 oz Colorized Silver Montserrat Emerald Isle of the Caribbean Coins feature the image of Queen Elizabeth II. Her Majesty is depicted in right-profile relief in the fourth-generation portrait from Ian Rank-Broadley.