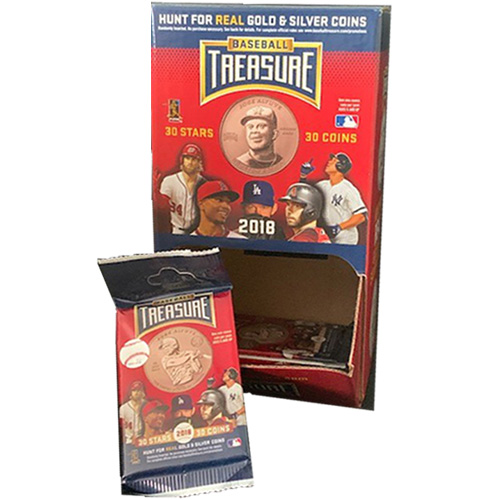 The Baseball Treasures series of silver and copper rounds debuted in 2018. The collection offers designs honoring some of the greatest modern-day players in Major League Baseball. With one round design for each of the 30 MLB teams, there is one player represented for each of the franchises in the game. Today 1 oz 2018 Copper Baseball Treasure Round Box Sets are available to you online at Silver.com.

Major League Baseball is the oldest professional sports organization in the United States. The National League and American League were once entirely separate entities, with the National League dating back to the 1870s and the American League the early 1900s. Today, the leagues compete amongst themselves and between one another in Major League Baseball with a single champion crowned at the end of each season.

All of the 1 oz 2018 Copper Baseball Treasure Round Box Sets are available to ship to you inside of a cardboard shipping box. The box includes a total of 30 individual packs of 2018 Copper Baseball Treasure Rounds. Each one of the rounds has One Troy ounce of .999 fine copper and its own distinctive design. Please note that the box contains 30 packs, but that the packs are not necessarily all different. You could receive duplicate rounds inside of the packs.

The 2018 Baseball Treasure Box comes with 30 packs of copper rounds, but there is also the possibility to receive one of two rare chase coins. The collection includes a .999 fine silver version of each copper round design with odds of receiving one in the box (instead of a copper round) at 1:12 boxes. The gold chase coin honors Aaron Judge’s rookie-record 52 homeruns in 2017 and is available with odds of 1:600 boxes. Designs possible in the 2018 Baseball Collection include the following possibilities:

The obverse of the 1 oz 2018 Copper Baseball Treasure Round inside of this box includes a portrait of a player from Major League Baseball. Each franchise is represented by just one player, with some of the biggest names in baseball depicted on the rounds. Specifically, the obverse includes a portrait of the player with a name, team name, and position inscribed.

On the reverse of each of the 2018 Copper Baseball Treasure Rounds is an action shot of the player depicted on the obverse. This side of the round includes the player’s stats from the 2017 MLB season.

Each one of the individual copper rounds is packaged inside of a player card-style case. The player’s name and image are repeated on the card.

Please feel free to reach out to Silver.com with any questions you have about these copper rounds. You can call us on the phone at 888-989-7223, chat with us live online, or email us directly.