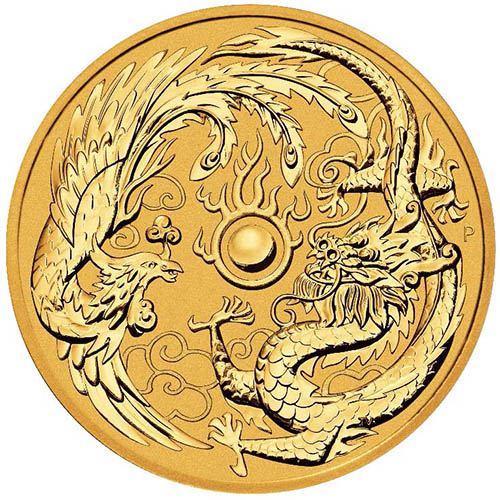 Any quantity available for $79.99 per oz over spot!

The newest addition the Australian annual bullion coin program is the Dragon and Phoenix coin. This series launched in 2017 with a silver issue, and now includes a gold coin for sale in the design series as well. From the Perth Mint, this coin brings more of the beauty of Chinese culture to bullion coinage. The 2018 1 oz Gold Dragon and Phoenix Coin is available to you for purchase today online at Silver.com.

The Dragon and Phoenix are among the most vital creatures in Chinese mythology and cultural lore. The dragon, for example, is the official emblem of the nation and was used by emperors for thousands of years as a sign of power and strength. The dragon is also believed to be a symbol of good luck and possess auspicious powers such as control over the weather.

As for the phoenix, this mythical bird is a symbol of renewal and is often associated with the sun, time, and resurrection. It was said that a phoenix could live as long as 1,400 years before dying in a show of flame and combustion. A new phoenix would then rise from the ashes as a symbol of renewed hope.

On the reverse of the 2018 1 oz Gold Dragon and Phoenix Coin you’ll find the two creatures ringed around the design field. The phoenix frames the left side while the dragon snakes down the right. In the center there is a flaming pearl, with the background field containing ornate clouds. There is also a “P” mint mark from the Perth Mint on this side.

The obverse of the Gold Dragon and Phoenix Coin features the right-profile portrait of Queen Elizabeth II. The longest reigning British monarch is shown here in a fourth-generation design created back in 1998 by Ian Rank-Broadley.

All of the 2018 1 oz Gold Dragon and Phoenix Coins in this listing are in BU condition. Coins in BU condition have no indication of wear and tear from handling. However, minor flaws such as breaks in the luster, spotted surfaces, or contact marks are possible as a result of striking blanks during coining.

We encourage all Silver.com customers to contact us with questions. You can call us at 888-989-7223, chat with us live online, or email us directly.