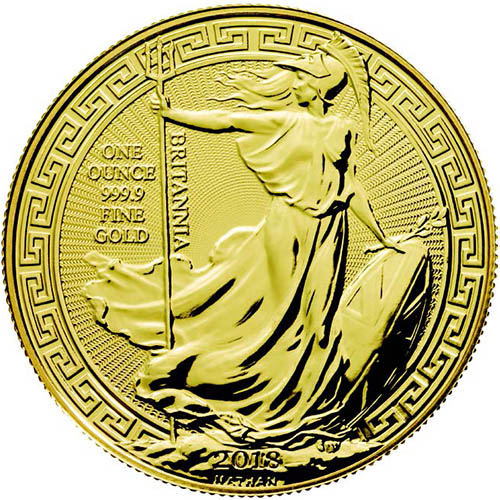 The Royal Mint of England strikes the Britannia Coin Series each year with a brilliant image of Britannia on one face, and the portrait of the reigning monarch Queen Elizabeth II on the other face. These coins are the official bullion products of the nation, and occasionally are offered with unique privy marks or other design elements. Right now, the 2018 1 oz Gold British Oriental Border Britannia Coin is available to purchase online at Silver.com.

All 2018 1 oz Gold British Oriental Border Britannia Coins available here are in BU condition. Coins in BU condition exhibit no signs of wear and tear, though minor flaws from the coining process are possible. These flaws range from breaks in the luster and spotted surfaces to contact marks.

British Trade Dollars, a form of currency used in international transactions primarily during the 19th century, were developed following Britain’s so-called Opium Wars with China. Protesting British sales of opium to Chinese citizens, in 1839 the two sides went to war. Two conflicts were contested. The first from 1839 to 1843 and the second from 1856 to 1860. At the conclusion, Britain had won and forced open ports across China.

With new adventurers and mariners flooding into China, the British Trade Dollar emerged as a form of currency for transactions in this foreign land. The original British Trade Dollars had a design on one side of Britannia surrounded by an oriental-themed border. That design aspect now returns on the 2018 1 oz Gold British Britannia Coin.

The reverse of the 2018 1 oz Gold Oriental Border Britannia Coins bears the familiar and iconic image of Britannia. This design debuted on the Gold Britannia in 1987 and was created by Philip Nathan. Included on this face of the gold coin is an oriental border pattern that originally featured on the British Trade Dollar and is inspired by the Chinese-themed rooms of Buckingham Palace and the Royal Pavilion in Brighton.

If you have a question, please don’t hesitate to ask. Silver.com associates are available to you at 888-989-7223, online through our live chat, and via our email address.