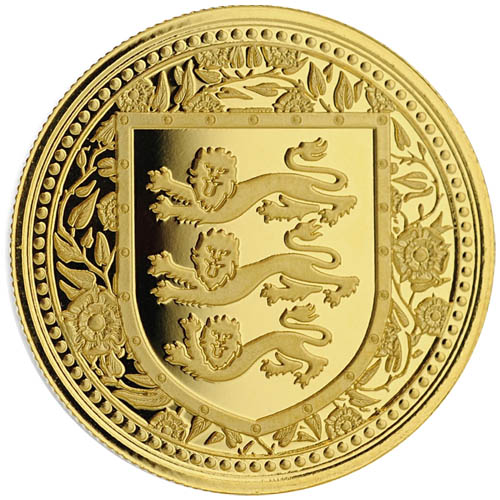 Few kings in the history of the Kingdom of England are remembered by a nickname rather than their numerical position, but this honor is bestowed upon King Richard I. His 10-year reign earned him the moniker of Richard the Lionheart thanks to his victories on the field of battle, and he is also remembered for designing the Royal Arms of England. The 2018 1 oz British Gold Royal Arms of England Gibraltar Coin is currently available to you online for purchase at Silver.com.

King Richard I came to power in England as the second-ever monarch from the House of Plantagenet. His father, King Henry II, was the first ruler in the dynasty and reigned for 35 years. Richard I’s reign was much shorter, but he had a massive impact on the reputation of the Kingdom of England.

Known as Richard the Lionheart for his prowess in battle, King Richard I was almost continuously away at battle fighting to protect Plantagenet lands in France and as the leading Christian commander during the Third Crusade in the Middle East. He was the lone commander to score numerous victories against the Muslim commander Saladin.

On the reverse of 2018 1 oz British Gold Royal Arms of England Gibraltar Coins is the design of the Royal Arms from Richard I. From 1189 until 1369, the Kings of England used the Three Lions design created by Richard I. The Three Lions are featured in passant guardant stance with heads turned toward the viewer and the right paw lifted off the ground. This design incorporates vines in the background with Tudor roses. The final monarch from the House of Plantagenet was Richard III who died in battle in 1485 against King Henry VII, the man who launched the House of Tudor.

The obverse of 2018 British Gold Royal Arms of England Gibraltar Coins features the right-profile portrait of Queen Elizabeth II. Her Majesty is depicted with the Royal Diadem crown in a third-generation design created in 1984 by Raphael Maklouf.

We encourage Silver.com customers to reach out to Silver.com with questions when buying gold. You can call us at 888-989-7223, chat with us live online, or simply send us an email with your inquiries.