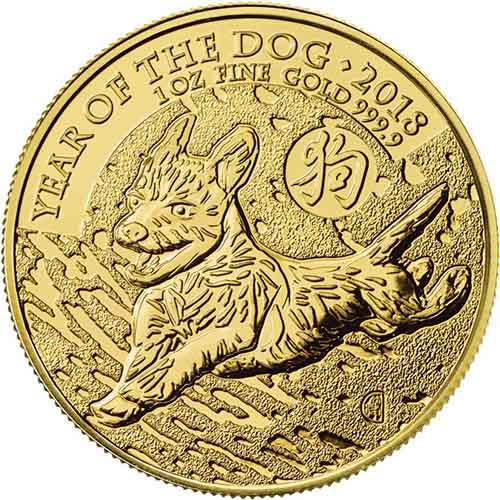 The Royal Mint’s lunar series of silver and gold coins is one of the most coveted among collectors and investors. Known as the Shengxiao Collection, these coins feature 12 designs in total to match the characters of the Zodiac. Each new release year brings a different design from Wuon-Gean Ho, a printmaker working with the Royal Mint on designs in the series. Right now, 2018 1 oz Gold British Year of the Dog Coins are available to purchase online at Silver.com.

Each 2018 1 oz Gold British Year of the Dog Coin in this listing is in BU condition. Coins in this condition exhibit no signs of wear and tear, however, there is the potential for minor flaws. The coining process can sometimes result in minor visual issues such as breaks in the luster, spotted surfaces, or contact marks.

The British Shengxiao Collection turns its focus in 2018 to the Year of the Dog. Mankind has always viewed canines as true and loyal companions, a trait said to be shared with their human counterparts born under the sign of the dog. The designs from Ho on the 2018 Year of the Dog coin focus on the popular terrier breed.

On the reverse of the 2018 1 oz Gold British Year of the Dog Coin is the image of a small terrier as it bounds happily across the design field of the coin. The background field has a rough effect that mimics the nose print of a dog. Terriers are a small hunting and game breed of dog that has been popular in the United Kingdom for hundreds of years.

The obverse of the Gold British Year of the Dog coin includes Jody Clark’s fifth-generation depiction of Queen Elizabeth II. Captured in right-profile relief, this portrait reflects the Queen at the age of 89. Clark, 33 at the time, was the youngest to create an image of the Queen for British coinage when he completed this design in 2015.

Britain’s Royal Mint was originally founded in the 8th century as the London Mint, with its primary facility now housed in Wales. The Royal Mint produces all British coinage as well as currency for some 60 other countries.