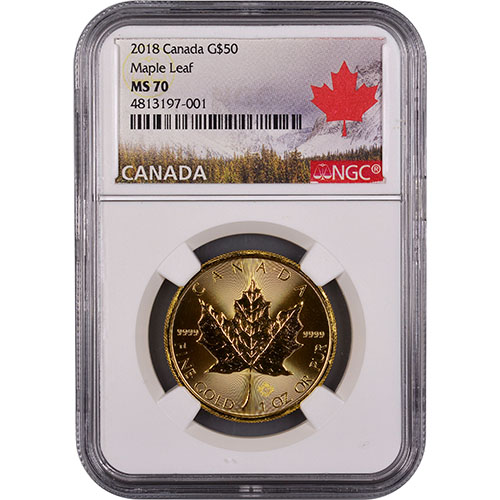 The sugar maple leaf is an iconic emblem to the people of Canada. As early as the mid-1700s, outside settlers were using the sugar maple leaf as a symbol for the nation because it represented longevity and strength. It now appears as the official emblem of the nation and features in the center of its national flag. Today, 2018 1 oz Gold Canadian Maple Leaf Coins are available to you online at Silver.com in perfect condition!

Gold Canadian Maple Leaf coins were first issued in 1979 in .999 fine gold content. The coin program was launched at an opportune time to take advantage of the economic boycott hitting South Africa. Western nations were boycotting South African goods in response to its apartheid system, which hurt the global distribution and sale of Gold South African Krugerrand coins.

Until 1979, the Krugerrand had been the only investment-grade gold bullion coin available to buyers. The introduction of the Gold Canadian Maple Leaf gave buyers another option, and the series offered variety with 1 oz gold, ½ oz, ¼ oz, 1/10 oz, and 1/20 oz coins. By 1982, the Gold Maple Leaf had been improved to feature .9999 fine gold content.

The 2018 1 oz Gold Canadian Maple Leaf coins listed here are perfect specimens as judged by the NGC. Coins with a Mint State 70 certification showcase full, original mint luster and have no detracting flaws anywhere on the surface areas or design elements.

On the obverse of the Gold Canadian Maple Leaf, you will always find the effigy of Queen Elizabeth II. The ruling monarch of Great Britain, the Queen has been on the throne since 1952 and this is the third of four possible effigies of the Queen to feature on the Gold Maple Leaf since its 1979 introduction.

The reverse of the 2018 1 oz Gold Canadian Maple Leaf coin includes the sugar maple leaf. Designed in 1979 by Walter Ott for the Royal Canadian Mint, this leaf captures the beauty and simplicity of the nation’s official emblem.

Please feel free to reach out to Silver.com if you have questions. You can call us at 888-989-7223, chat with us live online, or email us directly.