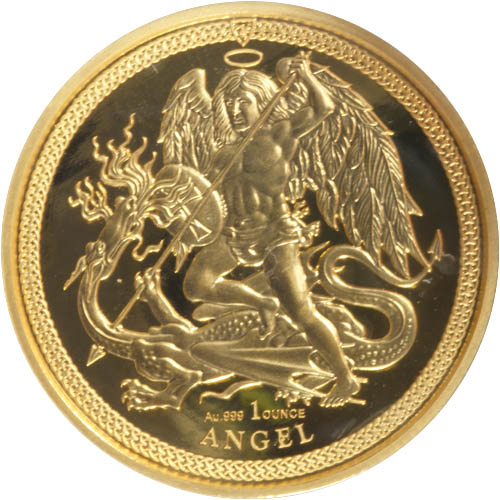 In 2008, the Isle of Man revived designs for gold bullion coins that hadn’t been produced in the United Kingdom in 366 years. The last time the English angel gold coin design was issued came in 1642 when King Charles I was on the throne of England. Now, this beautiful design is captured in new relief on an Isle of Man Series from the Pobjoy Mint. Right now, 2018 1 oz gold Isle of Man Angel Coins are available to purchase online at Silver.com.

Each of the 2018 1 oz Gold Isle of Man Angel Coins in this product listing comes with its own protective plastic capsule. All coins in this listing are available in Brilliant Uncirculated condition with a design inspired by the original 1465 English gold angel coins issued by King Edward IV.

Those original English gold angel coins debuted in 1465 with a design that was inspired by a French coin first issued in 1340. Both coins used images of the archangel Michael slaying a dragon, though this new design has modern visuals that give the imagery new life for the 21st century.

The obverse of 2018 1 oz Gold Isle of Man Angel Coins features the effigy of Queen Elizabeth II. Designed by Jody Clark in 2015 for the Royal Mint of England, this distinctive version for the Pobjoy Mint expands the portrait to include the neckline and shoulders of the Queen in the imagery. The Queen wears the George IV State Diadem crown, one that is typically only worn during the State Opening of Parliament.

On the reverse face of 2018 Gold Isle of Man Angel Coins is a depiction of the most powerful archangel of heaven. St. Michael is one of God’s leading warriors and is depicted in this modern design driving his spear through the neck of a fire-breathing dragon. His shield has a cross on it and his powerful wings flex behind his figure as a halo is depicted above his head. As a mark of the Viking history on the Isle of Man, the border field has a Viking-themed ribbon design along the edge.

If you have any questions about buying gold, Silver.com would be happy to help. You can call us at 888-989-7223, chat with us live online, or email us directly.