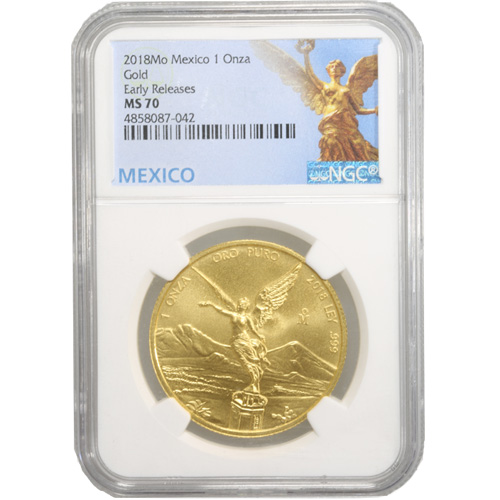 Gold Libertads from the Mexican Mint are issued annually as of 2002. The coins were previously issued once in the 1980s and four times in the 1990s, but it took two decades from the first issuance of the coins for the program to become an annual-release series. Right now, 2018 1 oz Gold Mexican Libertads are available to purchase online at Silver.com in perfect condition.

Each of the 2018 1 oz Gold Mexican Libertads in this product listing come to you with protective plastic slabs from the NGC. These coins have a Mint State 70 certification. This means the coins exhibit full, original mint luster and show no detracting flaws of any kind on the design elements or surface areas. The Early Release designation refers to the arrival of the coins for grading within 30 days of the initial release from the Mexican Mint.

Gold Libertad coins are a direct descendant of the historic gold Centenario coin. The Centenario was a 50 Peso gold coin issued by the Mexican Mint in 1921 to mark the 100th anniversary of Mexico’s independence from Spain. In that same year, the Mexican Independence Victory Column was completed with Winged Victory’s statue placed at its apex. Winged Victory just happened to be the focal point of the design in the Centenario and was revived in the Gold Libertad Series.

The obverse side of 2018 1 oz Gold Mexican Libertads bears a depiction of Winged Victory. The winged female personification is inspired by the goddess Nike and is shown atop the Mexican Independence Victory Column. Inscriptions on this face of the coin include the weight, metal content, date mark, and purity of the coins. There is also a mint mark from the Mexican Mint.

On the reverse field of the 2018 Gold Mexican Libertads features an image of the coat of arms for Mexico. The design captures the modern version of the national seal in the center with a ring of 10 additional seals around it to complete the design.

If you have any questions, Silver.com is here to assist you. Please contact us on the phone at 888-989-7223, chat with us live online, or email us directly.