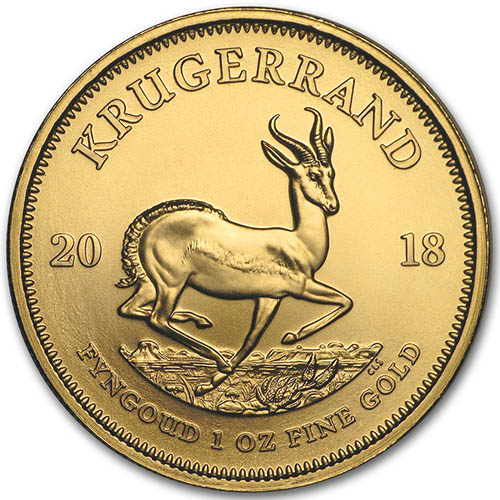 Introduced in 1967 to promote South Africa’s vast gold reserves, the Gold Krugerrand was initially available only as a 1 oz gold coin. Though initial mintages were low, with the first three years of production capped at 40,000 coins, demand rose in the 1970s. By 1974, the mint had struck one million coins in a year. In 1978, six million Krugerrands were coined.

In 1980, the South African Mint expanded the production of the Gold Krugerrand to include three fractional-weight coins. These included a ½ oz, ¼ oz, and 1/10 oz coin, which are still available today. In all, more than 50 million ounces of Gold Krugerrands are said to have been struck since 1967.

All 2018 1 oz Gold South African Krugerrand Coins in this listing are in BU condition. Coins in this condition show no signs of wear and tear, but you may notice minor flaws. Resulting from the production process, these flaws include possible breaks in the luster, spotted surfaces, or contact marks.

On the obverse of all Gold Krugerrand Coins you’ll find the effigy of Paul Kruger. Born Stephanus Johannes Paulus Kruger, he was the President of the South African Republic from 1883 to 1900. He was popular enough in his day that he was known in Afrikaan as Oom Paul, which translates to “Uncle Paul.” This design is from Otto Schultz and was created in 1984 to update the coin’s imagery.

The reverse of 2018 1 oz Gold South African Krugerrand Coins features the nation’s official symbol, the springbok antelope. This design has also been updated since 1967, with the depiction of the antelope captured here also from 1984, but created by artist Coert Steynberg.

Please don’t hesitate to contact Silver.com with questions. Our customer service team is available at 888-989-7223, online through our live web chat, or at our email address.