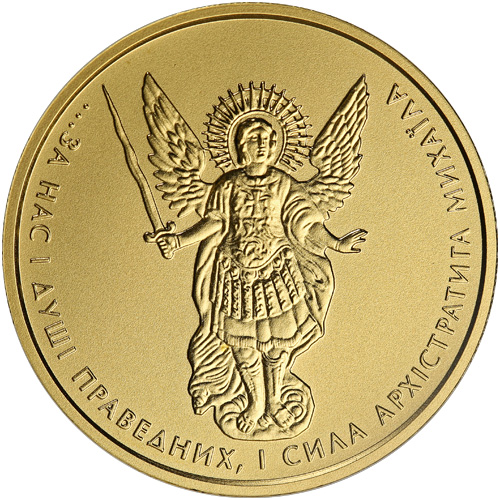 The Archangel Michael is one of the heroes of the Christian bible. It is Michael who is tasked with leading God’s armies into battle against the forces of evil sent by Satan. He earns his stripes as a leader of good in the Book of Revelations, and today is a patron saint for Ukraine and protector of the city of Kiev. Michael appears on the 2018 1 oz Gold Ukrainian Archangel Michael Coin, available to you for purchase online today at Silver.com.

Like many sovereign bullion coin programs, the Ukrainian silver and gold coins for sale in the Archangel Michael collection focus on national symbols. The designs on the obverse and reverse of these coins never change from one year to the next. The crest of the nation and its central bank feature on the obverse, with the guardian and protector of the city of Kiev gracing the reverse.

Michael is an archangel, which is a rank given to the angels who are held in the highest regard. During his battle with Satan in the Book of Revelations, Michael defeats Satan personally in leading God’s armies to victory. Today, Michael is known to millions around the world as the patron of warriors, the sick, and the suffering.

On the obverse of the Gold Ukrainian Archangel Michael Coins you’ll find the emblem of the National Bank of Ukraine on a shield in the center. A small version of the national coat of arms is captured in the center of the outer rim design above the shield. Engravings on this face identify the nation of issue, the National Bank of Ukraine, and the coin’s face value, year of issue, weight, and purity. All of these engravings are in the native language of Ukraine.

The reverse of the 2018 1 oz Gold Ukrainian Archangel Michael Coin features the image of Michael. Throughout history he was depicted in various reliefs, many of which were repeated over time and only a few of which became popularly used. This design is a common one for Michael and reflects his victory over Satan.

All 2018 Gold Ukrainian Archangel Michael Coins are in BU condition. Coins in BU condition have no signs of wear and tear, but may show breaks in the luster, spotted surfaces, or contact marks as a result of coining.

We encourage all Silver.com customers to contact us on the phone with questions at 888-989-7223. You can also feel free to reach out to us online through our live chat and email features.