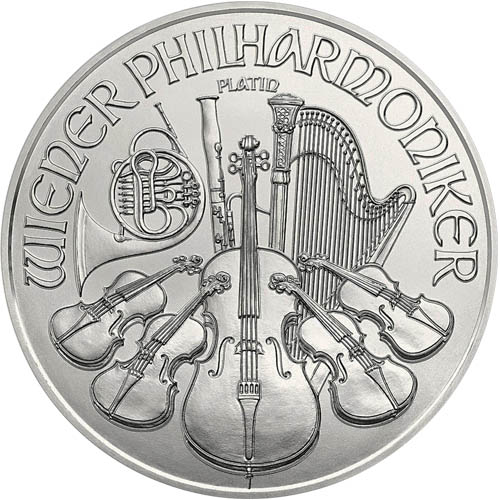 The Vienna Philharmonic Orchestra has conducted a regular schedule of musical performances in the capital city of Austria since 1842. The roots of the orchestra date back a further decade, and the official bullion coin of Austria celebrates the cultural significance of this group to the nation. Today, 2018 1 oz Platinum Austrian Philharmonic Coins are available to you online at Silver.com.

Orchestral performances occurred in the city of Vienna beginning in the early 1830s, but the group conducting these musical performances was not the same every time. Additionally, the schedule of performances was not consistent and took place at random intervals. However, this group served as the basis for what would later become the official Vienna Philharmonic Orchestra in 1842. Recognized today as one of the greatest orchestras in the world, the group is a symbol of Austria’s fine culture.

All 2018 1 oz Platinum Austrian Philharmonic Coins in this listing are in BU condition. Coins in this condition show no signs of wear and tear, however, it is possible for production flaws to result from striking blanks. Possible flaws range from breaks in the luster and spotted surfaces to contact marks.

Platinum Philharmonic Coins bears the same designs found on its gold and silver counterparts. Chief Engraver of the Austrian Mint, Thomas Pesendorfer, designed the obverse and reverse in 1989 for the issuance of the Gold Philharmonic. Today that design has been duplicated for the Silver Philharmonic’s debut (2008) and the Platinum Philharmonic (2016).

The obverse of Platinum Austrian Philharmonic Coins gives you a look inside the Musikverein, or Golden Hall, in Vienna. Inside is the massive Great Organ, a pipe organ that serves as an additional piece for orchestral performances. Engravings on this face include the nation of issue, engraved in German, as well as the weight, metal content, purity, year of issue, and face value of the coin.

On the reverse of the 2018 1 oz Platinum Austrian Philharmonic coin is a grouping of musical instruments. In the center is a cello, flanked on either side by two violins, with a harp, bassoon, and Vienna horn in the background. The engravings on this face include only the name of the Vienna Philharmonic Orchestra, again in German.

Please feel free to reach out to Silver.com with questions. You can contact our customer service team at 888-989-7223. You can also connect with us online through our live chat and email features. Don’t forget, you can find platinum prices listed on our website anytime!