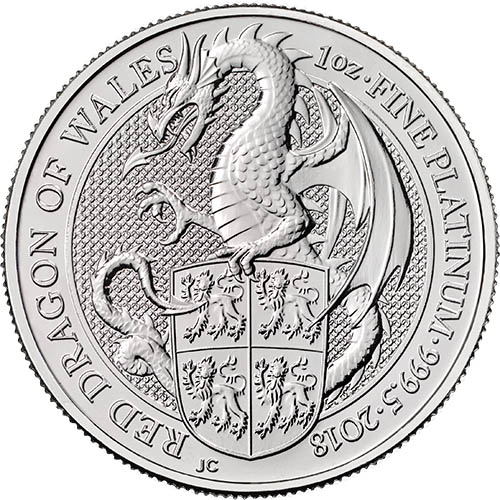 The Queen’s Beast Series from the Royal Mint launched in 2016 with plans for 10 coin designs in total. Each of the designs in the series is to represent a heraldic beast present in the form of a sculpted statue at the 1953 coronation ceremony of Queen Elizabeth II at Westminster Abbey. These heraldic beasts were introduced to the Royal Arms of England over the course of hundreds of years. Today, 2018 1 oz Platinum British Queen’s Beast Dragon Coins are available to you online at Silver.com.

Other original options included a ¼ oz gold coin and a 1 oz gold coin. In 2017, the Royal Mint expanded the bullion range to feature two new options. The silver coins got a 10 oz option, and these impressive 1 oz platinum coins were also struck. Investors now find five options to choose from with each new design release.

All 2018 1 oz Platinum British Queen’s Beast Dragon coins featured here are in BU condition. Coins in this condition show no signs of wear and tear, but minor flaws can persist from the production process. These range from breaks in the luster and spotted surfaces to contact marks.

On the reverse of the Platinum British Queen’s Beast Dragon Coin is the image of the Red Dragon of Wales. Introduced by Henry VII, grandson of Owen Tudor, it was the elder member of the Tudor family who first adopted the Red Dragon as a badge.

The obverse of 2018 1 oz Platinum British Queen’s Beast Dragon Coins includes the effigy of Queen Elizabeth II. Captured in right-profile relief, it depicts the Queen at the age of 89. This is the latest fifth-generation portrait of the Queen to appear during her long reign and was created in 2015 by Royal Mint Engraver Jody Clark.

Please feel free to call Silver.com at 888-989-7223 with your questions. We’re also available online using our live chat and email, and you can also visit our website at any time to view live platinum prices.