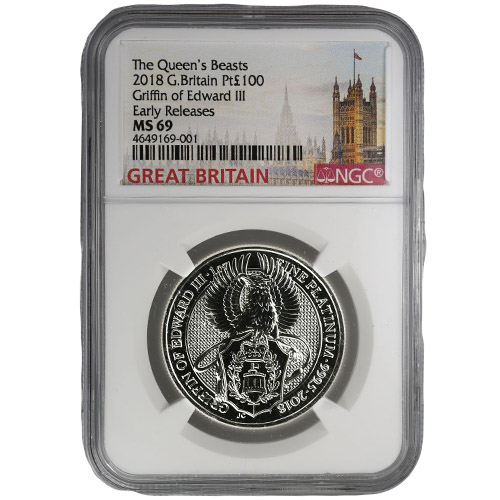 The Queen’s Beast Series of bullion coins debuted in 2016 with the Lion of England design on the Royal Mint’s first-ever 2 oz silver coin, as well as two weights in gold. The collection has carried on in silver and gold with images of the Griffin of Edward III, the Red Dragon of Wales, and the Unicorn of Scotland. With new platinum coins now available, the Royal Mint is giving investors a second chance at each of these beautiful designs. The 2018 1 oz Platinum British Queen’s Beast Griffin Coin is now available to you for purchase online at Silver.com.

The Griffin is a legendary mythical beast with the body, tail, and back legs of a lion. The head and wings of the beast are that of an eagle, as are the front feet which appear as talons in most depictions. The lion is the King of the Jungle, and the eagle the King of the Birds. As such, many refer to this mixed being as the King of Beasts.

On the reverse of the 2018 1 oz Platinum British Queen’s Beast Griffin Coin is the Griffin of Edward III. Under the rule of Edward III, the Kingdom of England grew to become the most powerful military in Europe during the medieval period. With a 50-year reign, Edward III was the second longest reigning monarch of medieval Britain.

2018 Platinum British Queen’s Beast Griffin Coins listed here are near-perfect specimens. The NGC gives MS69 grades to coins with full, original mint luster and a maximum of two minor detracting flaws. These flaws are limited in type to minuscule hairlines or contact marks, and limited in scope to areas outside the primary focal points of the coin surface.

Early Release coins are those which arrive for certification within 30 days of the release date set by the Royal Mint. ER coins must arrive at the NGC or a third-party depository within this timeframe to qualify.

We encourage Silver.com customers to contact us with questions. You can reach our customer service team on the phone at 888-989-7223, connect with us online through our live chat, or send us an email.