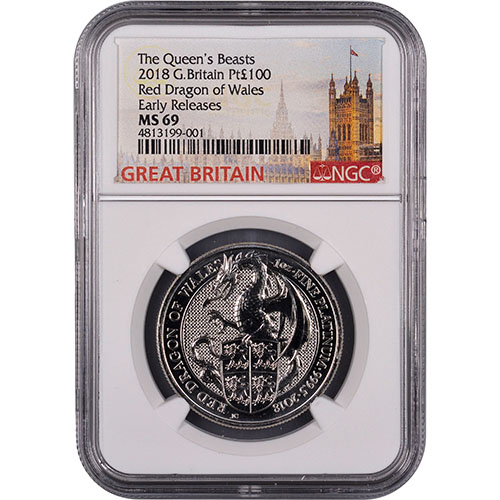 The Red Dragon of Wales has a history in Welsh culture that dates back to the sixth century, but it was the modern Queen of England who emblazoned the Red Dragon on the nation’s official flag in 1959. Queen Elizabeth II, early in her reign, moved to place the dragon on the flag of Wales, which is now internationally recognized as the national symbol. Today, 2018 1 oz Platinum British Queen’s Beast Dragon Coins are available to you online at Silver.com.

When the Queen’s Beast Series debuted from the Royal Mint, the coins were available in a first-ever 2 oz silver bullion coin, as well as a ¼ oz and 1 oz gold coin option. Those options launched in 2016, and due to the popularity of the coins the Royal Mint expanded options in 2017 to include a 10 oz silver coin and a 1 oz platinum coin.

These 2018 1 oz Platinum British Queen’s Beast Dragon Coins are the second designs to appear in the platinum issue of the series. Each coin available to you through this Silver.com listing earned a Mint State 69 certification from the NGC. Coins in this condition are considered near perfect, featuring full, original mint luster and a maximum of two minor detracting flaws. Those flaws are limited to minuscule contact marks or hairlines.

On the obverse of 2018 Queen’s Beast Coins is the latest design of Queen Elizabeth II’s effigy. Her Majesty is shown here at the age of 89 years old, and this fifth-generation design was unveiled by the Royal Mint in 2015 after its creation by engraver Jody Clark. Engravings on this side include “100 Pounds,” Elizabeth II,” and “D. G. Reg. F. D.”

The reverse of 2018 1 oz Platinum British Queen’s Beast Dragon Coins include the Red Dragon of Wales. The national symbol of the nation of Wales, the dragon was first associated with the legendary king of Gwynedd. Owen Tudor eventually claimed the Red Dragon, and King Henry VII would bring it into the Royal Arms.

Please feel free to reach out to Silver.com with your questions. Our customer service team is available at 888-989-7223, online through our live chat, or by simply sending us an email.