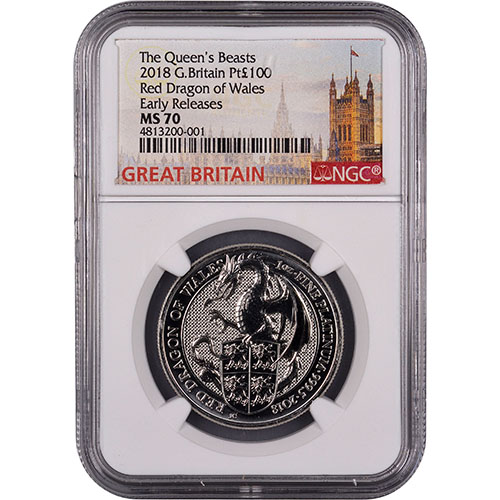 If you’re a regular precious metal coin buyer, platinum coins might be something you have little of in your collection. There aren’t many platinum coins available on the market compared to gold and silver, but those which are available bring a combination of .9995 fine platinum content and beautiful designs to bullion coinage. Right now, 2018 1 oz Platinum British Queen’s Beast Dragon Coins are available to purchase online at Silver.com.

Each individual 2018 1 oz Platinum British Queen’s Beast Dragon Coin featured here at Silver.com is in perfect condition as graded by the NGC. Coins that earn the Mint State 70 certification exhibit full, original mint luster and lack any sign of detracting flaws on the surface areas or design elements of the coins.

The Red Dragon of Wales is a mythical beast first referenced in the sixth century in Wales as the red dragon of Cadwallader, the legendary king of Gwynedd. The Red Dragon made its way into the Royal Arms through Owen Tudor, who claimed Welsh heritage. Tudor’s son would bring it to the English Royal Arms as King Henry VII, with his troops carrying the fiery red dragon standard into battle at the Battle of Bosworth. Henry VII’s victory there earned him the crown of England.

On the reverse of all 2018 1 oz Platinum British Queen’s Beast Dragon Coins is the Royal Arms and shield of the last native prince of Wales. The original shield was a quartered design with red and gold leopards supported by the Red Dragon. In 1959, Queen Elizabeth II authorized the red dragon for use on the official national flag of Wales.

The obverse of the Platinum British Queen’s Beast Dragon Coins bears the latest design of Queen Elizabeth II’s portrait. Created in 2015 by Jody Clark of the Royal Mint, it is the fifth portrait of Queen Elizabeth II to feature on British coinage since 1953. This right-profile portrait captures her image at the age of 89.

If you have any questions about these platinum coins, please contact Silver.com. You can reach out to us on the phone at 888-989-7223, chat with us live online, or simply send us an email.