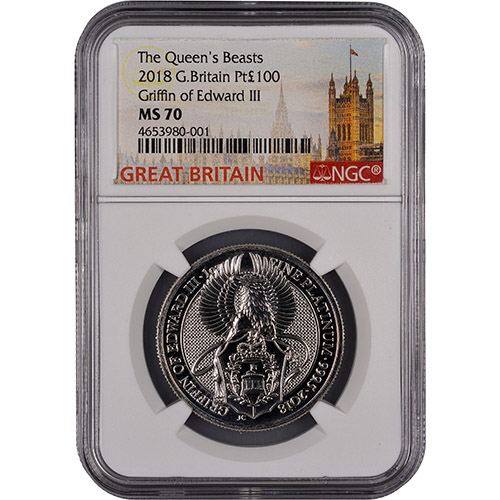 Each of the 2018 1 oz Platinum British Queen’s Beast Griffin Coins available to you here today are considered perfect specimens as judged by the NGC. Coins that achieve a Mint State 70 grade exhibit full, original mint luster and lack any kind of detracting flaws.

The Queen’s Beast Series is set to run through 2021 and include a total of 10 designs. Each design reflects one of the most important heraldic beasts in the history of the Royal Arms of England. Introduced by various queens and kings, these beasts were present as wooden sculptures at the 1953 coronation ceremony of Queen Elizabeth II.

On the reverse of the 2018 1 oz Platinum British Queen’s Beast Griffin Coin is the private seal of King Edward III. Reigning for 50 years, Edward III brought stability and military success to England as the King of England and Lord of Ireland. His seal included the mythical griffin, a beast associated with keen sight and swift action, alongside the falcon.

In mythology, the griffin was a strong, courageous beast that was often associated as a watchful guardian. The beasts were considered the king of all animals, with the wings and head of an eagle on the body and hindquarters of a lion.

The obverse of the Platinum British Queen’s Beast Griffin Coin bears the latest effigy of Queen Elizabeth II. Created in 2015 by Jody Clark, a Royal Mint engraver, the right-profile portrait is the fifth-generation image used since 1953 to represent the queen. At just 33 years old, Clark is the youngest engraver to complete a monarch’s design.