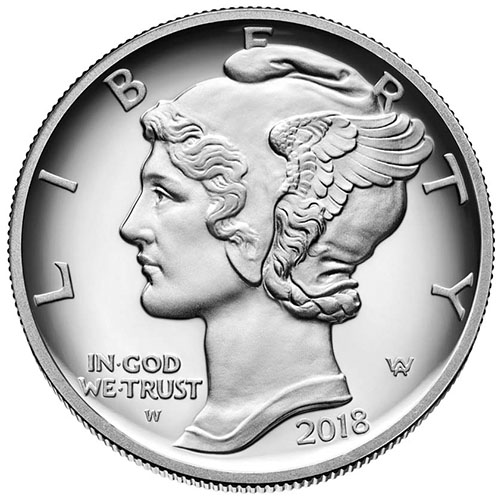 2018 Proof Palladium American Eagle coins feature the same brilliant design found on the bullion version of the coin. The obverse and reverse designs both come from Adolph A. Weinman and were created nearly a decade apart in the early 20th century. The Winged Liberty design comes from the Mercury Dime in 1916 and the American bald eagle from the American Institute of Architects Gold Medal in 1907.

On the obverse of 2018-W 1 oz Proof Palladium American Eagle coins is Winged Liberty. She is featured in left-profile relief and wears a Phrygian cap on her head. The resemblance of this Liberty design to the Roman messenger god Mercury led many to call the circulation dime of the era the Mercury Dime instead of the Winged Liberty dime.

The reverse of 2018 Proof Palladium American Eagle coins includes the design of an American bald eagle. Weinman crafted this design for use on the American Institute of Architects Gold Medal, which was first issued in 1907.

These 2018-W 1 oz Proof Palladium American Eagle coins feature “W” mint marks from the West Point Mint and ship inside of gray leatherette displays with a US Mint box for shipping. The coins all come with a Certificate of Authenticity as well.